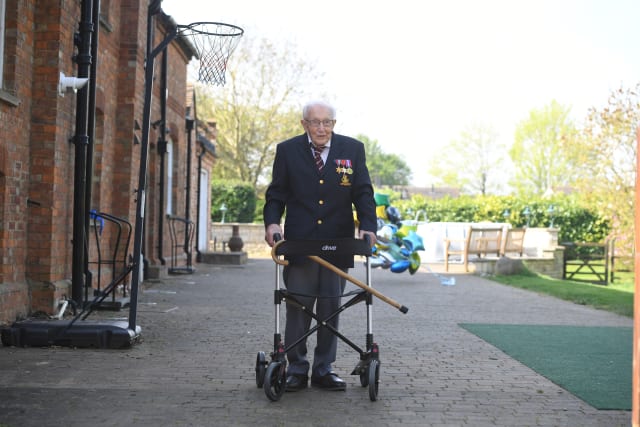 Captain Tom Moore will keep walking laps of his garden for as long as people are donating to his NHS fundraising appeal which has now topped £18 million, his daughter said.

The 99-year-old Second World War veteran set out to walk 100 laps of his garden in Bedfordshire before his 100th birthday on April 30.

His initial target was to raise £1,000 for NHS Charities Together.

He completed his 100th lap on Thursday, but as donations continue to pour in he plans to keep going.

Cpt Moore has been praised by the Duke of Cambridge and a long list of celebrities, and Prime Minister Boris Johnson is looking at ways to recognise his “heroic efforts”.

Speaking on BBC Radio 2’s Zoe Ball Breakfast Show on Friday, Cpt Moore said: “It really is absolutely enormous isn’t it. That sum of money is very difficult to imagine but it’s coming in so well.”

His daughter Hannah Ingram-Moore said: “Tom is clear that as long as people believe that he’s worth investing in, he will keep walking because this is for such a phenomenal cause.

“We know that this story will have a life to it, so as long as people are donating we’ll keep supporting my father to do it and he will keep walking.”

Cpt Moore was earlier shown a pre-recorded message from Prince William, in which he praised the veteran’s achievement as “incredible” and “amazing”.

In the video, William said: “What I love also is that he’s a 99-year-old war vet, he’s been around a long time, knows everything and it’s wonderful that everyone has been inspired by his story and his determination.

“God knows what the final total will be but good on him, I hope he keeps going.”

Cpt Moore, watching the recording on BBC Breakfast, said: “That I think is absolutely amazing.

“That my super prince can say something like that.”

He told Radio 2: “Never ever in my life did I anticipate being in touch with such important and super people who’ve been making kind remarks like this.

“It really is out of this world.”

Addressing the public, he added: “I say thank-you very much indeed because the object that we’re contributing is so important and so necessary, and I appreciate and think you’re all so kind and thoughtful in contributing to this cause.”

Ms Ingram-Moore said: “It’s been absolutely crazy because we genuinely did start off only 10 days ago with a goal of £1,000 and we thought that would be remarkable.

“Then we dreamed heady heights of £5,000, by the end of the month we thought we’d do this.

“Then we realised very quickly that this story that we knew about that was at our hearts had taken the hearts of the British public.

“This has become the British public’s story.

“It’s much bigger than us now.”