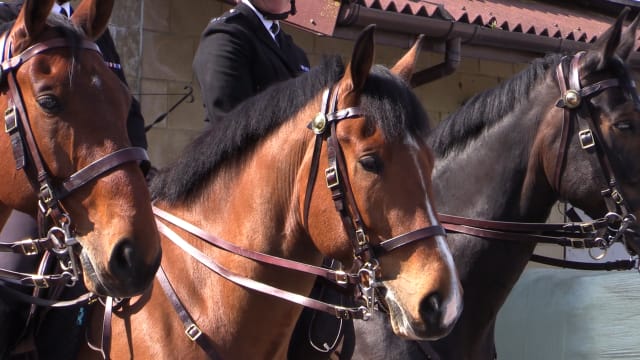 A police force has broken with a decades-long tradition of naming horses after locations and is paying tribute to the NHS by calling its latest recruit Hero.

Avon and Somerset Police have a 40-year history of naming police horses after places across the force area, including Clifton, Mendip, Quantock, Somerset and Wellington.

The force’s newest equine recruit, an Irish bay gelding, was officially named Hero on Thursday in a lasting tribute to NHS workers and carers working during the coronavirus pandemic.

Hero arrived from Ireland in January with the passport name Callow’s Hero and quickly became known as Hero in the stables and by his rider, Pc Tracey Small.

His stable name would have been changed once he completed his training but Avon and Somerset’s mounted patrol section requested to keep it in honour of those working in the NHS.

Sergeant Ed Amor said: “We wanted to take this opportunity to recognise the amazing work of NHS staff not just for now, but in the years ahead.

“We can confirm that Hero has many of the appropriate credentials to represent our NHS partners, having proved himself to be kind and brave, a hard worker and fast learner and a horse who adores people, especially children.

“We are immensely proud of our work in supporting and helping to protect the NHS and our intention is that when the pandemic is finally over, Hero will be a lasting recognition of the sacrifices and bravery of NHS workers.

“He will also continue to proudly unite our respective organisations for years to come as he goes about his future work, helping to control crowds, patrolling communities to reduce crime and provide reassurance, searching for missing people in open areas and in his community engagement and ceremonial duties.”

Police horses usually undergo several months of training behind the scenes but Hero has already started work and is regularly patrolling alongside his stablemates.

The force has only broken its naming tradition on three previous occasions, with police horses Jubilee, Windsor and Harry Patch.

Each of the horses was officially named by the Queen during previous visits.

Sue Mountstevens, police and crime commissioner for Avon and Somerset Police, said: “I was delighted when I heard about the naming of the newest police horse as it recognises the heroic efforts of the NHS and carers.

“These individuals have always gone above and beyond to keep us safe, especially in recent weeks.

“Hero will continue to serve as a reminder that we cannot let all the hard work of the NHS be in vain; we must all continue to stay home, protect the NHS and save lives.”