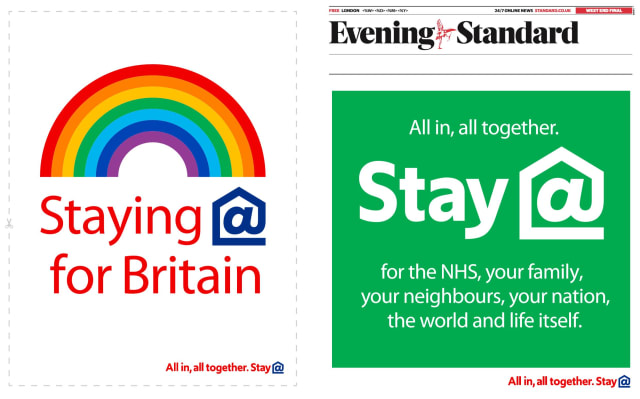 The Government has set up a three-month advertising partnership with the newspaper industry to push its “stay at home” message to the public.

On Friday, all regional and national daily news titles will run the slogan “Stay at home for the NHS, your family, your neighbours, your nation the world and life itself” as a cover wrap.

The message will also appear on the home pages of online outlets.

On the back page of the wrap is a rainbow – adopted as a symbol of support for key workers – and the words: “Staying at home for Britain.”

It is designed to double as a poster.

It marks the beginning of the Government’s three-month “All in, all together” newspaper ad campaign.

The campaign is intended to deliver its Covid-19 messaging in an “intimate, human and compassionate tone”.

Set up with the help of Newsworks, a marketing body for national newspapers, the deal is expected to provide a vital lifeline to newspapers – many of whom were struggling even before the crisis began.

It is understood the newspaper industry was originally asking for £45 million for the campaign, however it is unclear how close to that figure the arrangement is.

Minister for the Cabinet Office Michael Gove said: “Newspapers are the lifeblood of our communities and we need them now more than ever.

“Their role as a trusted voice and their ability to reach isolated communities is especially vital at this time.

Tracy De Groose, executive chair, Newsworks, said: “This is an amazing first for the newspaper industry and a clear demonstration of how we can bring it altogether for a brand campaign of this scale.

“As we all know the trusted flow of information is more important now than ever before and this partnership is a powerful endorsement of the strong relationship we have with our growing audiences across our local, regional and national news brands.”

She added: “Of course, our journalists will continue to scrutinise the actions of the Government at every turn of this pandemic and they will continue to play their part in defeating this terrible virus.”