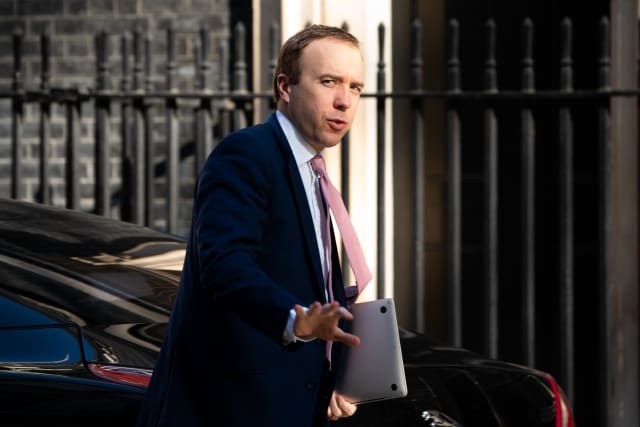 The coronavirus lockdown will be extended for another three weeks, the Government is expected to announce as the Health Secretary said it will take time for life to return to normal.

Ministers are meeting on Thursday morning to agree to prolong the social distancing controls announced on March 23, amid signs the epidemic in the UK is beginning to peak.

On Wednesday night, health minister Nadine Dorries took to Twitter to urge journalists to stop asking about an exit strategy.

She said: “There is only one way we can ‘exit’ full lockdown and that is when we have a vaccine. Until then, we need to find ways we can adapt society and strike a balance between the health of the nation and our economy.”

Health Secretary Matt Hancock said on Thursday he agreed that things will not go back to how they were, at least in the short term.

He stressed the number of deaths is still “far too high” for any exit strategy to be set out, adding the public must instead focus on staying at home.

He told Sky News: “Well I think what Nadine was saying is the idea that we’ll immediately… we’ll just switch off all of the measures and return to some kind of… to things exactly as they were – that is not likely in the short-term.”

He said Ms Dorries’ use of the word “full” when referring to the lockdown was key, adding he thought the “point that Nadine was making is that we will not be returning to some… just straight back exactly how things were before. This will take time.”

Speaking on BBC Radio 4’s Today programme, Mr Hancock said that how ministers communicate with the public has a “direct impact” on the number of cases and deaths, which are “still far too high”.

He said the message remains to stay at home and protect the NHS.

“The communications are part of the policy and that is why we will not be distracted into confusing that message,” he said.

He said the aim is to “talk about what is needed now and when we need to change that, we will”.

It came after Professor Neil Ferguson from Imperial College London, who is advising ministers, said “significant” social distancing will most likely be needed until there is a vaccine.

He told the Today programme that as restrictions are eased, more testing will be needed to isolate individual cases and trace their contacts to keep future outbreaks under control.

“Because without that, our estimates show we have relatively little leeway,” he said.

“If we relax measures too much then we’ll see a resurgence of transmission.

“What we really need is the ability to put something in their place. If we want to open schools, let people get back to work, then we need to keep transmission down in another manner.

Labour leader Sir Keir Starmer has said his party will back an extension to the lockdown, but has called on ministers to set out an exit strategy explaining how restrictions will eventually be lifted.

The Cabinet meeting on Thursday comes after the number of people who have died in hospital after testing positive for Covid-19 reached almost 13,000, with growing concern over increasing deaths in care homes.

Elsewhere, a leaked letter written on Saturday to a senior official at the Department of Health and Social Care by the Association of Directors of Adult Social Services (Adass) says mixed messages from the Government have created “confusion and additional workload”.

Seen by the BBC, the letter also raises fears about funding, testing, personal protective equipment (PPE) and the shielding scheme for vulnerable people.

Foreign Secretary Dominic Raab – standing in for Prime Minister Boris Johnson as he continues to recuperate from the disease – will chair the meeting of the Cabinet on Thursday morning.

It is expected that ministers will be briefed on the latest situation by the Government’s chief scientific adviser Sir Patrick Vallance.

Mr Raab will then lead a meeting of the Cobra civil contingencies committee when it is expected the extension of the lockdown will be formally approved.

The leaders of the devolved administrations for Scotland, Wales and Northern Ireland will take part by video link.

Downing Street has made clear Britain will not follow the US example in cutting funding to the World Health Organisation, saying the body has “an important role to play in leading the global health response”.

Meanwhile, the human cost of the epidemic was underlined with the disclosure that the latest victims of the disease included pregnant nurse Mary Agyeiwaa Agyapong, 28, who had worked on a general ward at Luton and Dunstable University Hospital for five years.

Her baby, a girl, was delivered successfully and was doing well, according to the hospital.

Elsewhere, captain Tom Moore, 99, who has walked 100 lengths of his garden to generate cash for the NHS has been praised as “an inspiration to us all” as his fundraising campaign passed the £12 million mark.