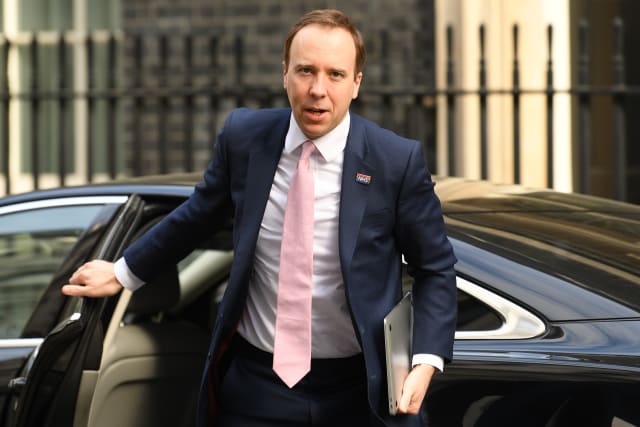 Health Secretary Matt Hancock will face questions from MPs on Friday over the Government’s coronavirus response, a day after lockdown measures were extended for at least another three weeks.

Mr Hancock is expected to be quizzed on PPE and an exit strategy as he appears before a virtual session of the Commons Health Committee.

It comes as Labour leader Sir Keir Starmer said that First Secretary of State Dominic Raab, who is deputising for Boris Johnson while he recovers from the virus, was “reluctant” to set out an exit plan without the Prime Minister.

Mr Raab said their was “light at the end of the tunnel”, but warned lifting restrictions too soon could risk a second peak of Covid-19.

The Foreign Secretary stated the original three-month timeline to come through the peak of the virus, set down by Mr Johnson, was broadly “still the outline”.

Also giving evidence to the Commons Health Committee on Friday is Prof Anthony Costello, chairman of global health at University College London, who will warn MPs the UK could face eight to 10 waves of coronavirus before the population achieves “herd immunity”, according to the Daily Telegraph.

The paper reports Prof Costello will tell the committee that the UK’s lack of wide-ranging testing could leave the country vulnerable to repeat outbreaks until a vaccine is developed.

Meanwhile office staff could be asked to wear masks in order to facilitate an eventual return to work, according to the Daily Mail.

Ministers are discussing telling people to use protective equipment in the workplace and public transport, it was reported.

Labour leader Sir Keir said the Government had not taken decisions fast enough during the emergency.

He told the BBC’s Coronavirus Newscast podcast: “I think that throughout this they’ve struggled with taking decisions quickly enough.

“The other factor though, I think, is we all know that the Prime Minister has been in hospital.

“We’ve all been pleased to see that he’s come out and is feeling better. And it feels as though they’ve been in a position probably for a week or 10 days now where it’s been difficult for the Government to make big decisions. And I think there’s a bit of that lying behind this as well.

“I suspect, although I don’t know, that Dominic Raab is just reluctant – he probably does know that it’s time for an exit strategy – but he’s probably reluctant to sign it off without the Prime Minister and I think there’s a bit of that in the mix.”

Announcing the lockdown extension, Mr Raab said the Government needed to be satisfied of five things before it would consider it safe to adjust the current measures.

– Confidence that any adjustments to the current measures would not risk a second peak in infections.

The Department of Health said the Covid-19 death toll in hospitals in the UK had reached 13,729 as of 5pm on Wednesday, up 861 on the figure the day before.

But Mr Raab said the rate of infection – the R0 value – was “almost certainly below one in the community”, meaning infected people were passing the disease on to fewer than one other person on average.