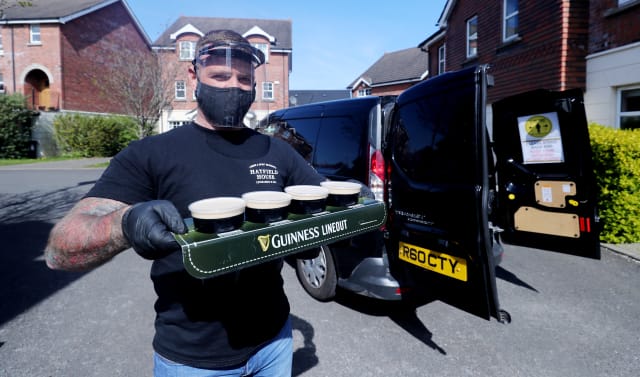 An enterprising Belfast publican is pulling pints on people’s doorsteps in a novel response to the coronavirus outbreak.

Hatfield House has been shuttered during the pandemic but is operating a Guinness-on-wheels service which it said was proving hugely popular.

Mobile bar staff are pouring drinks out of refitted vans into plastic glasses using latex gloves. Beers are then left on the doorstep with no contact with customers.

“They are ringing constantly from about 12 in the day.”

The service runs from midday to 11 six days a week and has reduced hours on Sundays.

A pint costs £4.80 and is pre-ordered to help manage demand.

Three vans are on the go in different sections of the city.

Mr Keenan said: “We have three taps to service the whole of Belfast.”

Mr Keenan said: “We did 20 pints for the whole street and dropped it at everybody’s driveway.”

The hospitality industry has been decimated by the infection, with many staff furloughed.

It will be weeks or months before bar owners can envisage opening their doors again.

While off-sales are open, some Guinness regulars could not resist a serving of draught stout straight from the keg at home.

Eugene Keaveney supped a pint in the sun in his driveway.

He said: “People get cabin feverish in the house with self-isolation.

“Anything that brings you back a sense of normality is brilliant.

“Getting a pint delivered to the door is more than just a novelty, it is giving people a bit of normality.

“Especially when it tastes that good it is great.”

He said people who drink draught Guinness regularly would not touch a can.

“There is a big difference,” he said.

“It is fantastic the service is available and it has obviously been flat-out.

“You can see that people are loving it and it obviously is making a lot of people very happy.”