Family bangs the drums in show of support for frontline workers 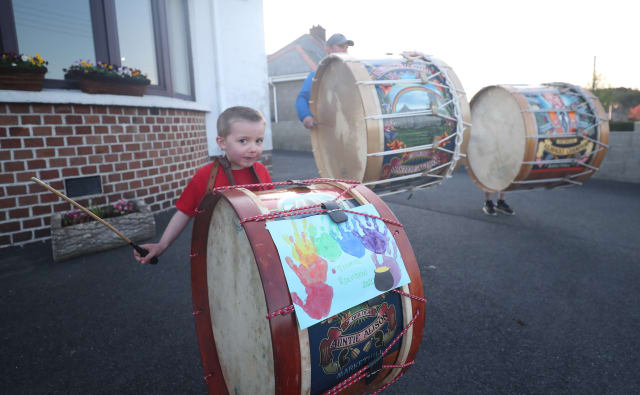 A family of Lambeg drummers made Thursday night’s clap for carers just that little bit louder in one Northern Ireland village.

Thomas and Adam Black, who are four and 10, joined their father Mark at the front of their house in Markethill, Co Armagh, to bang their drums for frontline workers.

The Orange Order had called on band members who traditionally take part in their summer parades to divert their musical skills to the 8pm tribute to the NHS.

Drummers across the region took up the challenge and played their Lambegs with gusto.

Adam and Thomas decorated their drums for the occasion with hand-made rainbow paintings with messages of thanks to the NHS.

Their mother Laura Black said the family was keen to show its support for all those working hard during the coronavirus emergency.

“It’s to show support for all the frontline workers,” she said.

“It’s for the people who are in the community who are working with elderly in their homes looking after them, for the lorry drivers, shopkeepers, people in the hospitals – anybody who is doing a frontline job at the moment.”

Elsewhere, in Londonderry the factory horn from the old Ebrington factory was sounded across the city in honour of the NHS and all frontline staff.

Last week, the siren at the Harland and Wolff shipyard in Belfast was sounded for the first time in two decades as part of the weekly clap for carers event.