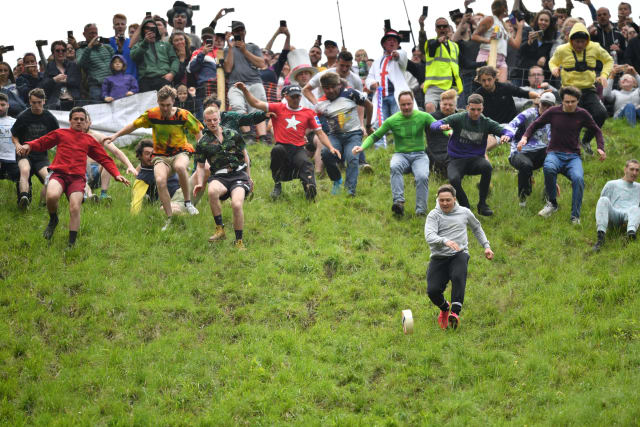 In an attempt to implement social distancing and stop mass gatherings, large events across the country have been cancelled, including some of the UK’s quirkiest and most bizarre traditions that take place in springtime.

Here’s a look at some of the more unique events affected by the coronavirus pandemic:

For the first time in the Yorkshire event’s 57-year history, organisers cancelled the Gawthorpe World Coal Carrying Championships which were due to take place on April 13.

The race, held each Easter Monday, sees competitors from around the world run a mile, while carrying heavy coal sacks weighing up to 50kg.

It came about in 1963 following an argument between two men in a pub in the village over who was the fittest.

An email to entrants read: “As a result of these new measures, it is very clear to us it will not be possible for our event to take place this year and public health must come first.”

Competitors who had booked a place are able to forward their entry into next year’s event, on April 5 2021.

Organisers cancelled the Hallaton bottle-kicking contest between two villages in Leicestershire, which was due to be held on Easter Monday.

The feisty event, which usually leads to injuries, sees teams from Hallaton wrestle against neighbouring Medbourne over kegs of beer to take back to their village.

In an announcement on Facebook, organisers said: “I am sure all the loyal supporters and fans of Hallaton Bottle Kicking will understand this decision, and let’s all stay safe and healthy and look forward to next year.”

The annual Maldon mud race in Essex has also been cancelled.

The event sees hundreds of competitors raise money for charity by racing to be the first to complete a 400-metre dash over the bed of the River Blackwater.

It was planned to take place on May 3, but organisers will allow runners to choose to transfer their entries to the 2021 race.

The world-famous cheese-rolling race in Gloucestershire has also been cancelled.

Hundreds of competitors chase a wheel of cheese 200 yards down Cooper’s Hill in Brockworth.

The quirky event usually takes place on the Spring Bank Holiday and is believed to have come from a celebration of the return of spring.

Although there will be no competitors, organisers said cheese will still be rolled down Cooper’s Hill on May 25, the date of this year’s bank holiday.

A Facebook post read: “In line with tradition a cheese will be rolled by the master of ceremony Jem Wakeman on the morning of the 25th.”

Organisers of an annual shin-kicking contest in the Cotswolds have cancelled this year’s event on May 29.

The contest, which has taken place on Dover’s Hill, near Chipping Campden, since 1612, sees two competitors kicking each other after filling their trouser legs with straw.

It is part of the “Olimpick Games” along with a series of competitions.

An announcement posted on the event’s website said: “We have not taken this decision lightly, but in light of official Government advice it would be reckless to jeopardise our community’s safety by putting extra pressure on the general infrastructure, closing roads and inviting thousands of people into the town- carrying on as normal is not an option.”

But organisers say they hope to do “something else” later on in the year.

The World Custard Pie Championship has been cancelled on May 30.

Normally, teams of four compete against each other and score points depending on where their thrown pie hits a member of the opposing team. Every player must throw with their left hand.

The championships were started in 1967 to raise funds for facilities in the village and has attracted teams from around the world.

Last year over 2,000 pies, made from a secretly-guarded recipe, were thrown during the competition.

Crowds of people usually arrive at the Coxheath recreation ground to see the teams go head-to-head.

A statement on the website read: “Fear not though, we will be back next year, bigger, better and messier than before. We are as disappointed as you, but rest assured we have more time now to make next year even better!”

The Swaton Vintage Day and World Egg Throwing Championships have also been cancelled.

The event, due to be held in Lincolnshire on June 28, sees teams of two standing 10 metres (33ft) apart and throwing eggs to each other, moving further away after each successful catch.

Teams are knocked out if they drop the egg, until five are remaining for the finals.

Chairman Charles Campion said: “We are extremely sorry to be making this devastating decision and have been monitoring the news and advice continually. As the situation has unfolded and intensified we realise we have no alternative but to cancel.”

Blackawton International Festival of Worm Charming was due to be held in South Devon on May 9.

But a statement on the event’s Facebook page confirmed it would be cancelled this year and will return next year.

Hundreds of teams of three attempt to “charm” worms from the ground using liquids such as water, beer, gravy and sugar. Competitors are not allowed to dig or pour harmful liquids.

A statement said: “In keeping with the current need for social distancing, Wormcharming 2020 has regrettably been cancelled and it looks like we’ll have to wait until 2021 before we host the 36th Blackawton International Festival of Wormcharming.”