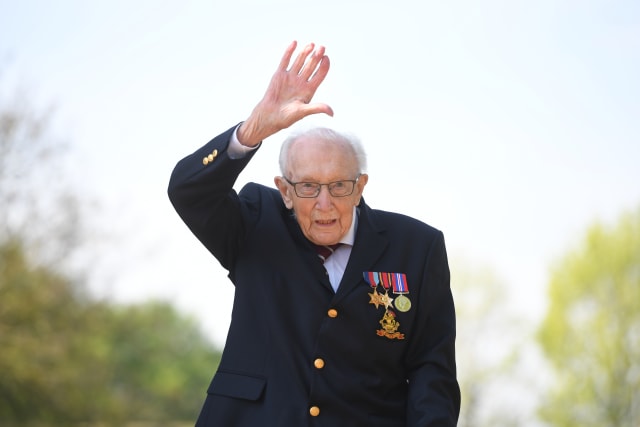 Prime Minister Boris Johnson will look at ways to recognise the “heroic efforts” of 99-year-old Captain Tom Moore, who has raised more than £13 million for the NHS by walking 100 laps of his garden.

The Second World War veteran set out to complete the challenge before his 100th birthday on April 30, wanting to give something back to the staff who treated him for a broken hip.

He successfully completed his 100th length on Thursday, at the Bedfordshire home where he lives with his family, but he plans to carry on as donations continue to pour in.

Downing Street said that Mr Johnson will look at ways to recognise Cpt Moore’s efforts, amid multiple calls for Cpt Moore to receive a knighthood.

The Prime Minister’s spokesman told a Westminster briefing: “From his military contributions to his support for NHS staff, Tom has demonstrated a lifetime of bravery and compassion.

“The Prime Minister will certainly be looking at ways to recognise Tom’s heroic efforts.”

Number 10 said Cpt Moore had “captured the heart of the nation” and “embodied the spirit of the whole country in doing their bit for the battle against coronavirus”.

By Thursday afternoon, more than 700,000 supporters had donated more than £13.8 million on Cpt Moore’s JustGiving page – the largest total ever raised in a single campaign on the website.

Cpt Moore completed the final 25-metre lap of his 100-lap challenge as a special guard of honour by the 1st battalion of the Yorkshire Regiment looked on.

Speaking at the finish line, he said he felt “fine” and that he was “surrounded by the right sort of people”.

Cpt Moore said plans for his party have been affected by the virus but that the national outpouring of love and support for him was “a party enough for me”.

There is also an online campaign for children to make him birthday cards.

He told ITV that the public generosity had been “unbelievable”, adding: “Our country and all our nations, we’re all so generous in all sorts of ways.

“But it’s for a super purpose.

“Nurses, doctors and all the back-up workers, they deserve everything we can give them.”

Cpt Moore was given a special mention in a press briefing on Wednesday by Health Secretary Matt Hancock, who described him as an “inspiration”.