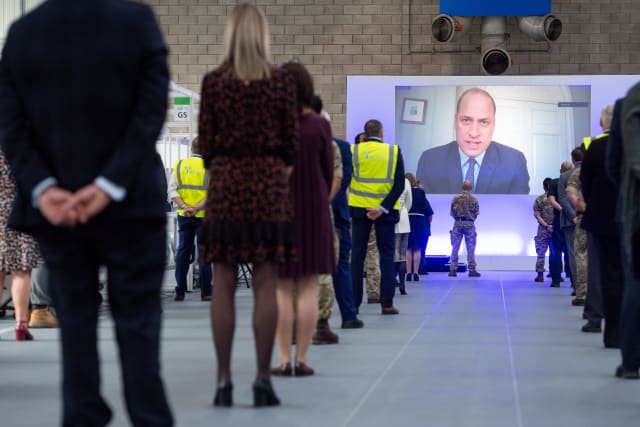 The Duke of Cambridge phoned the team behind the new Birmingham Nightingale Hospital to thank them for their efforts – and was told the temporary facility was built “on kindness”.

William spoke to a group of staff via videophone from his Norfolk home to learn more about the project and their experiences working while the country is in lockdown.

During the conversation, held before the royal formally opened the hospital, project director Morag Gates told the duke: “It was phenomenal teamwork from everybody. It is probably the best example of teamwork I’ve ever seen in my entire 40-year NHS career.”

The temporary field hospital was built inside the NEC exhibition centre in just eight days, and William replied: “It is incredible to think how quickly you’ve done that. That is phenomenal speed.”

He added: “It is so impressive how you all work together, and how well everyone is pulling together.”

William went on to say: “I can’t congratulate and thank all of you enough for all of your hard work in putting this together. It’s a herculean effort and you should be, rightly, very proud of what you’ve achieved. Thank you for everything you’ve done. It really means a lot to everybody.”

Professor Jamie Coleman, an associate director of the University Hospitals Birmingham NHS Foundation Trust, said after the video call that the duke asked “lots of very pertinent questions”, including about local generosity, “both businesses and people”.

He said: “We were able to tell him about the overwhelming support that we have had, anything from supermarkets to Nestle Easter eggs. He warned about our waistlines!

“He was very interested in family life, and how this was affecting us all. It is very easy for us in a way, because we have had a real focus, even if it has been working incredibly long hours.

“We have been able to get out of our houses, we have had something to distract our minds from the social isolation others are feeling. He was touched by the personal stories of support and generosity of the public at this quite difficult time in everybody’s life.

“My neighbour has been mowing my lawn, very kindly. He suggested that I went and had a look and made sure that they hadn’t mowed their own initials into my back garden!”

The professor said the idea was for the hospital to take less severe patients, to allow other hospitals in the area to provide critical and acute patients.

He added the facility would need to be adaptable and could end up treating patients who have had delayed surgery or treatment for other conditions.

During the first phase, it will have 500 beds but so far had been approved for 124.

Prof Coleman said about the duke: “His real pertinent question was, will there be any positives to come out of this really quite challenging situation?

“It is kindness all around – people taking time to be kind. Life is usually so rushed that nobody does that. He was struck by that.

“What makes the hospital is the people.

“It is the kindness of the people, both internally and externally, not the bricks, that will make Nightingale work.

“He said that was something he noticed himself as well, and hoped that would be something for the future, not only of Britain but of the world as a whole.”

Returning to the office: What you need to know

Business minister 'right to wait' for police over rape claim