WHO ‘regrets’ Donald Trump’s decision to halt US funding 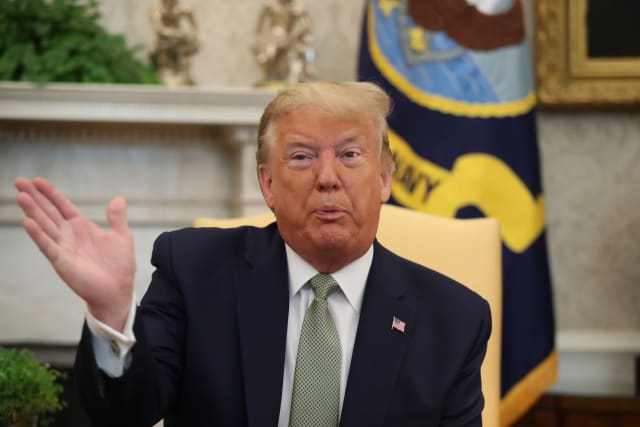 The World Health Organisation said it regrets Donald Trump’s decision to halt US funding, adding that now is a time for everyone to be united against the threat of Covid-19.

The US president accused the international body of “severely mismanaging and covering up” the spread of the coronavirus.

He said his administration would suspend funding of up to £400 million (500 million US dollars) a year for the organisation.

Dr Tedros Adhanom Ghebreyesus, WHO director general, said: “The United States of America has been a longstanding and generous friend to WHO, and we hope it will continue to be so.

“We regret the decision of the President of the United States to order a halt in funding to the World Health Organisation.”

He added: “With support from the people and government of the United States, WHO works to improve the health of many of the world’s poorest and most vulnerable people.

“WHO is not only fighting Covid-19. We’re also working to address polio, measles, malaria, Ebola, HIV, tuberculosis, malnutrition, cancer, diabetes, mental health and many other diseases and conditions.”

Speaking at a press briefing, Dr Ghebreyesus said WHO is reviewing the impact on its work of any withdrawal of US funding and will work with partners to “fill any financial gaps we face and to ensure our work continues uninterrupted”.

He said: “Covid-19 does not discriminate between rich nations and poor, large nations and small.

“It does not discriminate between nationalities, ethnicities, or ideologies.

“Neither do we. This is a time for all of us to be united in our common struggle against a common threat. A dangerous enemy.

“When we’re divided the virus exploits the cracks between us.”

He added: “My focus is on stopping this virus and saving lives.

“WHO is grateful to the many nations, organisations and individuals who have expressed their support and commitment to WHO in recent days, including their financial commitment.

“We welcome this demonstration of global solidarity.”

Mr Trump said US taxpayers are the largest contributors to the WHO, dwarfing the amount paid by China.

He claimed the WHO had made a “disastrous” decision to oppose travel restrictions from China, but the president said his actions in ignoring that advice had saved “untold numbers of lives”.

He has previously accused the United Nations’ health agency of being “China-centric”.

Downing Street defended the WHO’s role and said the UK was not planning to follow Mr Trump’s lead, adding that the organisation was playing an important role in tackling the spread of the virus.

The Prime Minister’s official spokesman said: “Our position is that the UK has no plans to stop funding the WHO, which has an important role to play in leading the global health response.

“Coronavirus is a global challenge and it’s essential that countries work together to tackle this shared threat.”

Asked if the Government was disappointed by Mr Trump’s move, the spokesman said: “I can only set out the UK’s position and that is we have no plans to stop funding the WHO.”

The UK’s funding for the organisation was based on an assessment of what it needed, something that was kept under review but was not affected by other countries’ decisions, the spokesman said.

The Government “wants to see the WHO continue to learn lessons on how to improve its response to global health emergencies” and the spokesman called for “transparent and accurate” information about the virus.

“We want to work with all parts of the international community – including China – to ensure a joined-up response to the pandemic.”

Scientists railed against Mr Trump’s actions, stressing the need for international co-operation in tackling Covid-19, and hit out at the “short-sighted” move.

“I suspect this move has the support of precisely 0% of the US scientific and healthcare communities, and, I would hope, only a small minority of the population as a whole.”