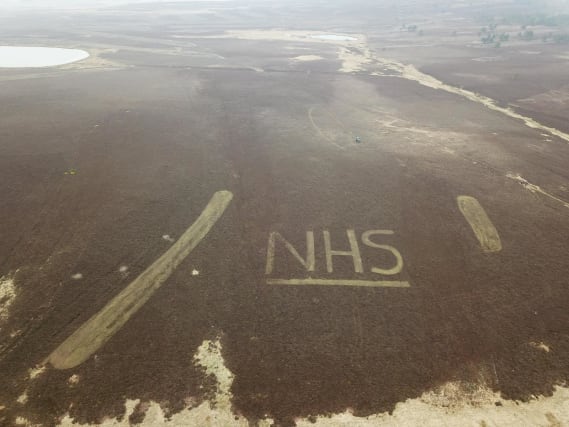 Gamekeepers in the Scottish Borders have shown their solidarity with health workers during the coronavirus outbreak by cutting the letters “NHS” into a moor.

Head gamekeeper Jamie Goodall and Tom Wilson noticed the road by Greenlaw Moor was becoming much busier with emergency vehicles passing by.

As many as eight or nine ambulances at a time were spotted by the men, who decided on a novel way to show their support to the key workers as the Covid-19 crisis continues.

At this time of year, the gamekeepers would normally be carrying out legal muirburn but dry weather meant the estate voluntarily stopped muir burning on March 26.

The gamekeepers then applied to Scottish Natural Heritage (SNH) to be allowed to cut 20 acres of heather instead on the protected site despite it becoming a fire hazard in the warmer spring weather.

After that was done they decided to put their swipe and mower to use to show support with the passing ambulance workers.

Mr Goodall, who is a member of Southern Uplands Moorland Group, had aunts who were nurses and his mother works in the care sector.

He said: “An area of the ground we were working on is adjacent to the Greenlaw to Duns road and we were chatting about the number of ambulances we were seeing, compared to before.

“At times there were eight or nine in the period we were working.

“It was when we were talking about it, we decided it would be a good idea to use the mower to cut the words into the hill for when they were passing by.

“Hopefully they can see it and will feel their work is being appreciated by us all.”