Key dates of the HS2 project 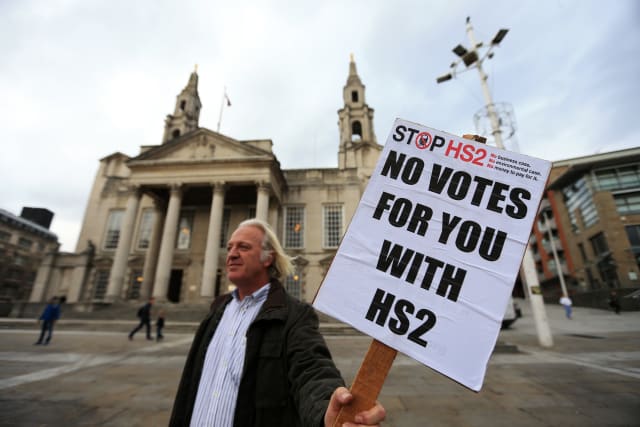 HS2 has been a controversial project since plans emerged more than 10 years ago.

Here is a timeline of key events:

A consultation on a route for HS2 from London to Birmingham, with a Y-shaped section to Manchester and Leeds, is published by the Conservative-Liberal Democrat coalition.

Transport secretary Justine Greening announces the Government has decided to go ahead with the project, despite concerns over its cost and the environmental impact of construction.

The High Speed Rail (London-West Midlands) Bill setting out the powers needed to build Phase 1 of HS2 between London and Birmingham is introduced to Parliament.

The Supreme Court rejects outstanding appeals by opponents of the rail scheme.

The National Audit Office warns HS2 is under financial strain and could be delayed by a year.

HS2 Ltd accepts it was a “serious error” to make £1.76 million of unauthorised redundancy payments to staff.

The Conservatives commission a review into whether and how HS2 should continue, led by former HS2 Ltd chairman Douglas Oakervee.

A report by HS2 Ltd chairman Allan Cook says the railway may not be completed until 2040 and could cost £88 billion.

The Oakervee Review is widely leaked.

It finds that HS2 could cost up to £106 billion, but concludes “on balance” that the project should continue.

The first HS2 trains between London Euston and Birmingham were due to begin running by this date, but the project is behind schedule.

The current estimate for when services will start between Old Oak Common, west London, and Birmingham.

When the line is forecast to be extended to London Euston.

Phase 2a from Birmingham to Crewe was due to open this year, but that is also delayed.

HS2 was due to be completed by this point, with Phase 2b running from Crewe to Manchester, and Birmingham to Leeds.

It is not clear when either part of Phase 2 will be completed.