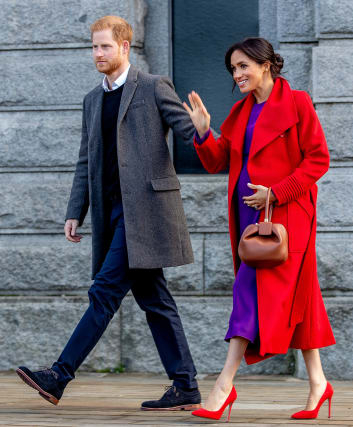 The Duke and Duchess of Sussex have arranged for money generated from their royal wedding broadcast to be used to help feed children during the coronavirus pandemic.

Harry and Meghan asked for £90,000 – the excess profits from the BBC’s broadcast – to be given to the charity Feeding Britain.

A spokesman for the couple said they had been moved to hear of the organisation’s work during the coronavirus crisis.

Harry and Meghan, who have now quit as working royals and are living in the US, phoned the Archbishop of Canterbury, who conducted their marriage ceremony in 2018 and who is president of Feeding Britain, to discuss the donation to the charity’s countrywide projects.

They became aware of Feeding Britain after paying a royal visit to the Feeding Birkenhead community supermarket in Merseyside in January last year, when Meghan was pregnant.

“The duke and duchess were able to speak to the archbishop recently, and were moved to hear all about the work Feeding Britain was doing to support people during Covid-19,” a spokesman for the Sussexes said.

“They have particularly fond memories of their visit to the citizens’ supermarket in Birkenhead, especially the generosity and compassion of everyone working there to help others.

“They are delighted to be able to ensure this money is donated to such a great cause.”

The couple felt it was particularly fitting to be able to support the archbishop’s charity after he played such an important part in their lives and their wedding day.

Andrew Forsey, national director of Feeding Britain, said: “We are incredibly grateful for such generous support which, thank God, will sustain our emergency response to coronavirus until the schools return.

“During that time, there are many tens of thousands of children who we are helping to supply with breakfast, lunch and dinner every day.

“We’re just so grateful that the duke and duchess have contributed to that programme.”

The BBC covered most of the costs of the wedding broadcast, and used money raised from transmission rights and subsequent sales.

It was agreed at the time of the wedding that if there was any excess, a percentage of the profits would go to a charity nominated by Harry and Meghan.

The independent charity Feeding Britain works to eliminate hunger and its root causes from the UK.

It has warned that “schools are the first line of defence against hunger for so many children – at both breakfast and lunchtime. We cannot allow coronavirus to breach that defence”.