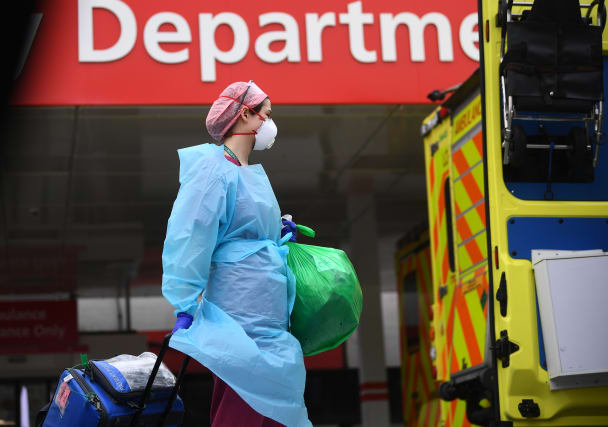 Downing Street has admitted personal protective equipment (PPE) may have to be reused after it emerged doctors are washing their own visors and hospitals have told medics to wear gowns again.

The Prime Minister’s official spokesman said it was “right that where possible strategies optimising the supply of PPE can be explored”.

He added: “We understand that the Health and Safety Executive and Public Health England are continuing to discuss ways in which pressure can be eased on the supply chain, including potential of reusing certain equipment, but only where it is safe to do so.”

The spokesman said more than 923 million pieces of PPE have been delivered in total to NHS trusts and care homes.

It comes after reports that frontline staff are still struggling to access PPE, with some buying their own or using bin bags.

Comments gathered by the British Medical Association (BMA) and shared with the PA news agency show how, as recently as Monday, medics were being forced to work without adequate PPE.

Meanwhile, a carer told LBC radio she was wearing swimming goggles due to a lack of PPE.

On Monday, an obstetrics and gynaecology trainee in the South East said there had been no eye protection for the last three weeks and there were no facilities to clean footwear.

“Surgical masks are not fluid resistant,” they said. “There are no reinforced gowns for high volume procedures (e.g. C-section).

“PPE equipment is in short supply – and often locked away. We have bought more than £4,000 worth of PPE over the last four weeks as a group of trainees.”

On the same day, an anaesthetics trainee in Scotland said: “We’re having to wash our visors in disinfectant because we don’t have enough.

“We also ran out of hand gel briefly and were provided with a bucket of steriliser to dip our hands in.”

A core medicine trainee in the East of England said: “The trust is now asking us to reuse single-use gowns not only between patients but also when we leave and return from breaks.”

A foundation year doctor on a Covid-19 ward for the elderly in the North West said on Monday: “After the death of two of our nursing colleagues, the trust, on the same day, announced that gowns would no longer be amply provided, and we had to ration the remaining supplies amongst our staff, on our ward.

“We decided to let our nurses and healthcare assistants have priority with the gowns, as they have more patient contact time. As the gowns completely ran out, some staff used bin bags instead.”

Meanwhile, an A&E doctor in the East of England said there were no gowns or scrubs on their most recent shift.

Care minister Helen Whately said earlier on Wednesday that there has been a “global scramble for PPE” and distributing it to care providers and GPs has been a “massive logistical effort”.

She added: “It is a precious resource … we have to make sure it is used when you need it to either protect a member of the workforce or protect a patient, because people have been crying out wanting to use PPE all the time for everything and actually that is not the best way.”

But Jane, an independent living carer in Hampshire, told LBC she was having to wear her “mask and goggles” from her time spent as a swimming teacher.

“We have no PPE whatsoever,” she said. “We’ve tried every single avenue possible but we’ve got nothing.”

The comments come after a leaked Public Health England (PHE) document, seen by the BBC, shows national planning to reuse protective masks and gowns amid a “reduced ability to re-supply” PPE.

“These are last-resort alternatives, but, given the current in-country stock and the reduced ability to re-supply, we are suggesting that these are implemented until confirmation of adequate re-supply is in place”, it said.

The plans suggested a series of “last-resort arrangements”, including buying “building” or “sportswear” eye protection with extensions to cover the side of the eyes if there are no available goggles or face shields, and using washable laboratory coats and patient gowns where there are no available disposable gowns or coveralls.

The document said some of the measures would need to be reviewed and approved by the Health and Safety Executive (HSE).

Dr Chaand Nagpaul, chairman of the BMA, said: “Despite recent assurances from Government, these distressing accounts show that some hospitals and practices across the country are still reporting critical shortages over the last few days, and the worrying lengths they are being forced to go to in dealing with this.

“The Government must be honest about supplies, and the BMA is again urging it to go to all lengths to boost domestic production and improve access to international supplies, including through co-operation with our European neighbours, so that health and social care staff get the right equipment when they need it.”

In a statement, Dr Susan Hopkins, Covid-19 incident director at PHE, said: “PPE is a precious resource and it is crucial that everyone in health and social care has access to the right protective equipment.

“All options are being considered to ensure this, including the safe reuse of items, but no decisions have been made.”

An HSE spokesman said: “We are discussing with Public Health England ways in which pressure can be eased on the supply chain. This includes potentially reusing certain equipment where it is safe to do so.”