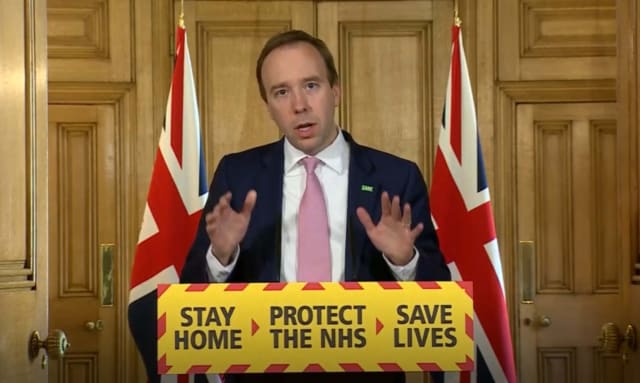 Close relatives will be able to say goodbye to their loved ones as they die from coronavirus, the Health Secretary has said, as he stopped blanket do not resuscitate agreements being put in place for the elderly and vulnerable.

Matt Hancock announced a package of measures aimed at combating the spread of coronavirus in care homes following huge criticism of the Government’s response to the growing crisis.

Those running care homes have accused the Government of forgetting staff and the elderly, citing inadequate stocks of personal protective equipment (PPE) alongside a lack of testing.

Mr Hancock said that “wherever possible” people will be given the “chance to say goodbye” to loved ones dying with coronavirus, after reports of the elderly dying alone in care homes and some hospitals banning all visitors.

He said “wanting to be with someone you love at the end of their life is one of the deepest human instincts”, and said as a father himself he wept at reports of 13-year-old Ismail Mohamed Abdulwahab, from Brixton, south London, dying without a parent at his bedside.

“I’m pleased to say that working with Public Health England, the care sector and many others, we are introducing new procedures so we can limit the risk of infection while wherever possible giving people’s closest loved ones the chance to say goodbye,” he said.

And he announced a new “single brand” with a badge for care workers, which he said may help them access similar perks to NHS staff.

“This badge will be a badge of honour in a very real sense, allowing social care staff proudly and publicly to identify themselves, just like NHS staff do with that famous blue and white logo.

“I know that many businesses will want to offer the same recognition and benefits as they do wonderfully to the NHS.

”Supermarkets have been asked to give the same priority access to care workers as NHS staff.”

But Rehana Azam, national officer of the GMB union, said: “Our care workers need more than a badge and a pat on their head to define their precious role in society.

“They need the protective equipment and testing on the front line now to protect their lives. Ministers should be moving mountains to support our care sector to get the kit workers need available where and when they need it.

“Care workers are serially undervalued, highly skilled and massively underpaid. It will take far more than branding to get them the recognition and support they deserve and that battle will continue until care workers are treated the same as NHS workers.”

Mr Hancock said the Government was making “crystal clear” that it is unacceptable for advanced care plans – including do not resuscitate orders – to be applied in a blanket fashion to any group of people.

“This must always be a personalised process, as it always has been,” he said.

As previously announced, staff and residents from care homes with symptoms will be tested, as Mr Hancock insisted there is enough capacity in the system to cope with the extra testing.

The previous rule of testing just five people in a care home has been scrapped, so all those who need a test and have Covid-19 symptoms get one.

Anyone being discharged from hospital to a care home will also be tested and quarantined until the results come through.

It comes as it emerged a pregnant nurse has died at Luton and Dunstable University Hospital after testing positive for coronavirus.

Mary Agyeiwaa Agyapong, who worked as a nurse on a general ward at the hospital, died on Sunday.

The baby was successfully delivered and is doing well, according to the hospital.

David Carter, chief executive of Bedfordshire Hospitals NHS Foundation Trust, said: “Mary worked here for five years and was a highly valued and loved member of our team, a fantastic nurse and a great example of what we stand for in this trust.

“Our thoughts and deepest condolences are with Mary’s family and friends at this sad time.”