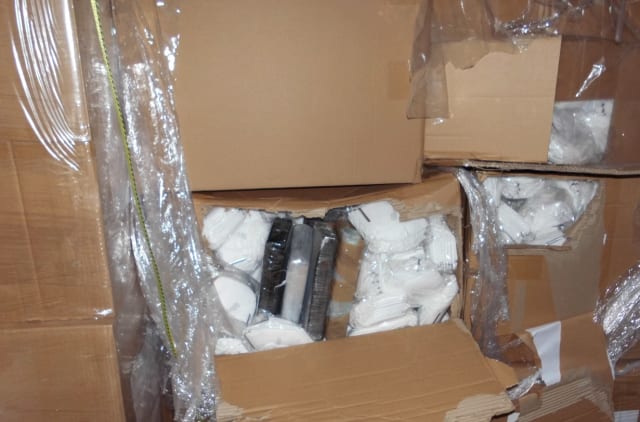 Cocaine with a street value of more than £1 million was discovered hidden inside a shipment of face masks on Tuesday.

Border Force officers found about 14 kilos of the drug at the UK control zone in Coquelles after they stopped a Polish-registered van, which was attempting the enter the UK via the Channel Tunnel.

A box of 15 wrapped packages were found hidden inside the van, which had been transporting boxes of protective face masks.

The contents of some of the packages were tested and proved positive for cocaine.

Ian Hanson, Border Force regional director for Coquelles, said: "This seizure shows the lengths drug smugglers will go to. It is despicable to think they would try and exploit the current situation in this way to get their dangerous drugs on to the UK's streets.

"It is testament to the expertise of my Border Force officers that this smuggling attempt was prevented and shows we remain active on the front line in keeping the country safe from illegal drugs and the harm they cause.

"Every year, Border Force officers seize Class A drugs worth hundreds of millions of pounds. Working with law enforcement colleagues like the National Crime Agency (NCA) we are determined to prevent drug trafficking."

The driver, a 34-year-old Polish national, was arrested and the investigation passed to the NCA. He remains in custody being questioned.

The masks have been detained pending checks by regulators, the Home Office said.

NCA Dover branch operations manager Darren Herbert said: "This seizure is further evidence of the way criminal networks are attempting to exploit the coronavirus outbreak to their own ends, covering this load of drugs with what would seem like vital protective equipment.

"We are now investigating who was behind this attempt, but what is clear is that they have taken a substantial hit. At UK street prices this haul might have raised more than £1 million once adulterated and cut down – profit that they have now been denied."