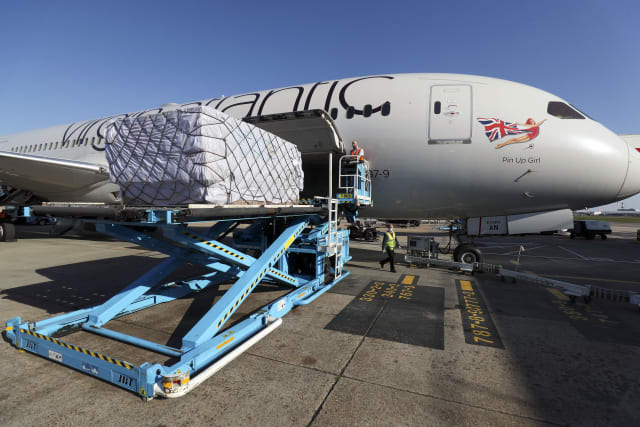 More than three quarters of a million items of personal protective equipment (PPE) have been flown from China to the UK.

The 6,000-mile cargo-only Virgin Atlantic flight from Shanghai to Heathrow was chartered by the NHS and the Department of Health and Social Care.

The items were transported on passenger seats and in overhead lockers, as well as in the hold.

They will be distributed across the UK.

Tuesday’s flight was the fourth of eight cargo-only operations the airline is running from Shanghai to Heathrow this month to deliver medical supplies.

Dominic Kennedy, managing director of Virgin Atlantic’s cargo division, said the airline is “playing a part” to support the NHS by carrying “crucial” medical supplies to the UK.

He went on: “It’s more important than ever to keep global supply chains running and transporting the equipment that teams here in the UK urgently need, working closely with our partners to make this happen.”

It has cancelled the majority of its passenger flights due to the drop in demand, and next week will temporarily switch most of its remaining scheduled flights to cargo-only services.

Airlines have suffered a collapse in passenger numbers due to the coronavirus pandemic, but demand for cargo flights has increased.

Heathrow said it usually handles an average of 47 cargo-only flights each week, but handled 38 on March 31 alone.

Overall cargo volumes are down though due to the grounding of passenger fleets, as around 95% of cargo usually travels in the hold of passenger aircraft.

The aviation industry is urging the Government to offer more financial support the stop firms going bust due to the pandemic.

Virgin Atlantic called for airlines to be offered emergency credit facilities worth up to £7.5 billion.

Chancellor Rishi Sunak said he will not create a specific support package for the industry, but the Government is prepared to negotiate with individual firms once they had “exhausted other options” such as raising cash from existing investors.