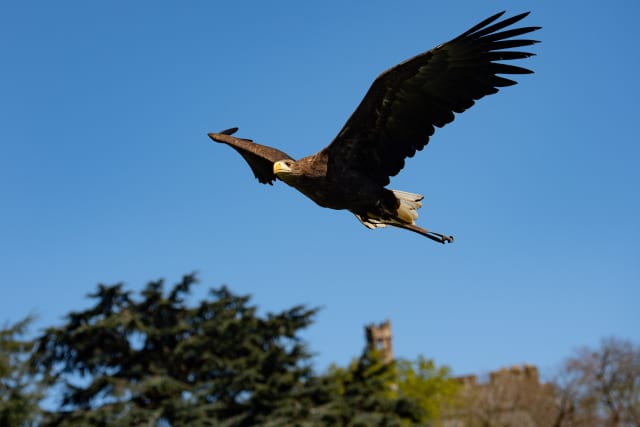 A self-proclaimed “idiot who asks questions in front of a camera” has raised nearly £100,000 for the NHS, while eagles are continuing to soar at the home of the UK’s biggest birds of prey show.

Here is a look at some of Tuesday’s more uplifting stories you might have missed.

A quiz master who has raised almost £100,000 for the NHS by running a virtual pub quiz on YouTube says the response has been “overwhelming”.

Jay Flynn, a former pub landlord from Darwen in Lancashire, has raised more than £93,000 for the NHS after a small online quiz he planned went viral when he accidentally made a Facebook event publicising the event public.

He added: “I’m just an idiot who asks questions in front of a camera.”

– Birds of prey continue to soar

Falconers at Warwick Castle are pressing on with their normal duties during the coronavirus lockdown, feeding and flying dozens of birds of prey despite the attraction being closed to visitors.

Head falconer Chris O’Donnell, who is living at the site, said he and two colleagues looking after the birds were getting used to the “weird” situation.

Mr O’Donnell told the PA news agency: “Life is going on. We have been shut for about a month now but we have around 70 eagles and vultures, ranging from Andean condors downwards, that still need exercise and flying.

“We are flying birds every day. Nobody has seen it, but life goes on.”

Tom Moore is aiming to walk 100 lengths of his Bedfordshire garden before he turns 100 years old on April 30 and was originally hoping to raise £1,000.

Plymouth have paid tribute to the NHS with a special decoration of their Home Park pitch.

The League Two club got their head groundsman Chris Ralph to work with the mower, cutting a pattern reading “Thank You NHS” into the turf.

Plymouth had already handed their stadium over to the local NHS Trust, who are using it for phlebotomy and antenatal appointments during the coronavirus pandemic.