The NHS workers who have died during the Covid-19 outbreak 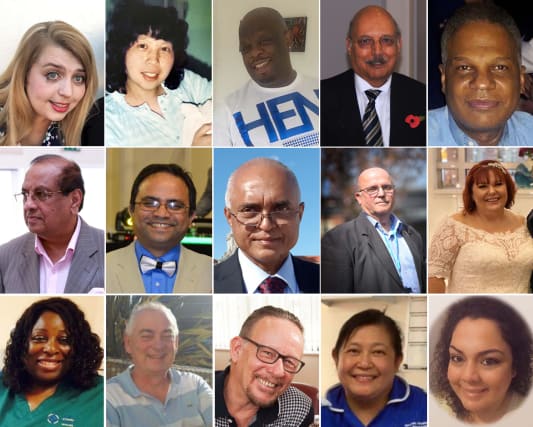 A nurse with five children is among the latest of dozens of NHS workers who have died after contracting coronavirus.

The Government has confirmed 19 deaths amongst those working for the health service, but announcements from NHS trusts and tributes from loved ones indicate the true number is higher still.

Aged 55, the mother of five was an agency nurse who lived in Leeds and worked at Harrogate Hospital. She died on April 13.

Her daughter said: “It meant everything to be a nurse, she’s being doing it for as long as I remember – more than 30 years.”

Mrs Medel, who worked as an agency nurse in south Wales, was described as a “wonderful and caring person”. Her employers, Cardiff-based Hoop Recruitment, said: “The nursing profession has lost a warm-natured and beautiful nurse who cared for so many vulnerable people during her nursing career.”

Amarante Dias, who worked at the Weston General Hospital in north Somerset, was described as a “valued and much-loved colleague” and would be “greatly missed”.

The “dedicated and very caring” Filipino nurse, 60, died at St Mary’s Hospital in Paddington, London, on April 12, just two days after being admitted.

Aged 45, Oscar King Jr, a Filipino porter at the John Radcliffe Hospital in Oxford, passed away on April 11.

He was said to have worked for the hospital for more than a decade, “always doing his job with great enthusiasm and joy”.

A “highly regarded” associate specialist in cardio-thoracic surgery at the University Hospital of Wales, Mr Rathod died on the morning of April 6.

A care co-ordinator in Hillingdon,  north-west London, Ms Perugia was aged just 29 at the time of her death, which was confirmed on April 5.

She was described by a colleague as a “lovely woman, who never said no to any requests”. Her mother, sister, brother and fiance all work for the same NHS trust she represented.

Aintree University Hospital said the staff nurse died on Friday April 3, with her family describing the loss as “simply beyond words”.

The Mail On Sunday reported that the 27-year-old nurse, who treated coronavirus patients at Watford General Hospital, died after a shift on Friday April 3.