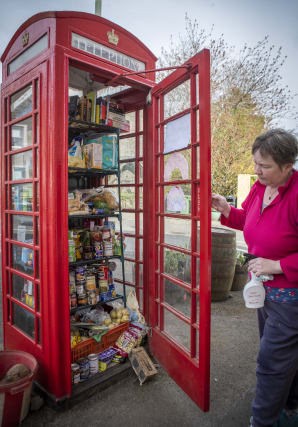 Villagers have transformed a phone box into a food larder to help the community during the coronavirus pandemic.

Corrina Robertson, from Muthill in Perthshire, came up with the idea to help people including those struggling financially and those having trouble getting to the shops.

Along with villager Susan Crawford, chairwoman of Muthill in Bloom, they turned a red phone box into a larder using plant stands as shelves.

The initiative has proved popular since it launched last Thursday, with villagers donating items such as pasta and tins, while local farmers have been dropping off vegetables.

Mrs Robertson said: “The village have pulled together and put in stuff, and there’s been tremendous community spirit.

“Nobody knows everyone’s circumstances and not everyone is in a great financial position so it’s give what you want, take what you need and leave what you don’t.

“It’s for the whole of the village.”

Some people have left books and jigsaw puzzles in the larder, while the landlord of the Commercial Hotel dropped off Easter treats for all the children in the village.

Muthill in Bloom made an initial donation to start the larder off and residents have been topping up the shelves ever since.

Ms Crawford said: “We only started it last Thursday and it has been so well supported.

“There’s everything from toiletries and tins to the hotel keeper donating Easter packs, to local farmers putting in turnips and potatoes.

“If it spreads a bit of joy in the times we are in then that’s great.”