Recall of duty for first wave of retired police officers 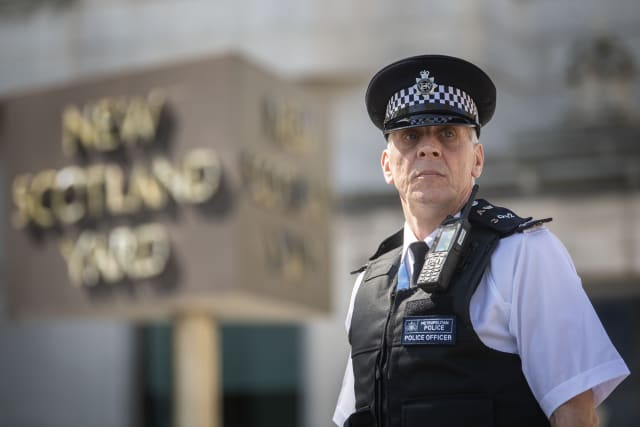 It will be a case of recall of duty for Pc Stuart Hepburn as he returns to the streets he patrolled as a rookie.

The 53-year-old, who retired from the Metropolitan Police in 2017, is among the first wave of officers to step in to help during the coronavirus crisis.

Speaking outside New Scotland Yard, Pc Helpburn said he had policed numerous major events in his 30-year career, including the 1990 poll tax riots.

But nothing was like the current crisis, he said: “Not on this scale. This is a pandemic, it’s completely different.”

The veteran officer decided to rejoin the force after seeing a televised appeal by Commissioner Cressida Dick.

He said: “I had no doubts about returning to help my colleagues and serve London once again.

“I felt I couldn’t sit at home and watch – I wanted to help, so I applied straight away.

“I’m looking forward to seeing old colleagues again and the camaraderie that comes with the ‘job’ that is really like no other.”

He went on: “When you look at what’s been happening, the pandemic in London and the police being the people that they are, they look after people, try to help people, I just felt sitting there I had to do something.”

Pc Hepburn originally joined Scotland Yard as a “bobby on the beat” in 1987 when he was 21.

During his 30-year career, he worked with the Parliamentary and Diplomatic Protection (PaDP) team, protecting famous sites in central London.

In his new role, he will be dealing with emergency calls in the boroughs of Kensington and Chelsea, Hammersmith and Fulham, and Westminster, including Oxford Street, which was his first beat.

On the potential dangers of coming close to people in the course of his duties, he said: “I would be silly if I said it did not worry me.

“But that is part and parcel of the job. You’ve got to do it. I’m quite happy to do it. I’ve been trained so I will use my training.”

He said he would be engaging with the public over the new rules and enforcing them, if needs be.

“We are very good at talking to people, police are good at that.

“Hopefully by talking to people and making them understand why, we are able to move these people on. It shouldn’t be a problem,” he added.

Just over two weeks since Ms Dick issued her call, Pc Hepburn is among the first 10 officers to return to work.

Between them, they have more than 250 years of policing experience.

He began his policing career in 1991 as a constable based in Ilford, east London, before training as a detective in 1998 and going on to work in investigative and covert roles with the Homicide Task Force and the Flying Squad.

Mr Yeoman has now been deployed to investigate crime in the boroughs of Barking and Dagenham, Redbridge, and Havering.

He said: “I just felt I had to come back and help because that is what I joined to do all those years ago.

“The process of returning has been quick and I am looking forward to the challenge and the rewards that come with policing in London all over again.”

Ms Dick said: “It is wonderful to see the first of our former colleagues joining us this week.

“Their valuable skills and experience are helping increase the Met’s resilience and allow us to be even more flexible in providing the best service we can to London during this unprecedented time as the country – and the capital – responds to the ongoing coronavirus outbreak.

“I am very grateful to all of them for not hesitating to come back and not surprised they still hold strong the same desire to help people and keep people safe as the very first day they joined.

“I have no doubt they will join their colleagues in displaying the best of British policing values at this challenging time for us all.”

A second intake of 17 officers will begin their training on Tuesday before returning to London’s streets.

More than 50 former officers have applied to return as members of the Special Constabulary, where they will be committing to at least 16 hours a week.

Other officers are among more than 300 people who want to volunteer with the Met.