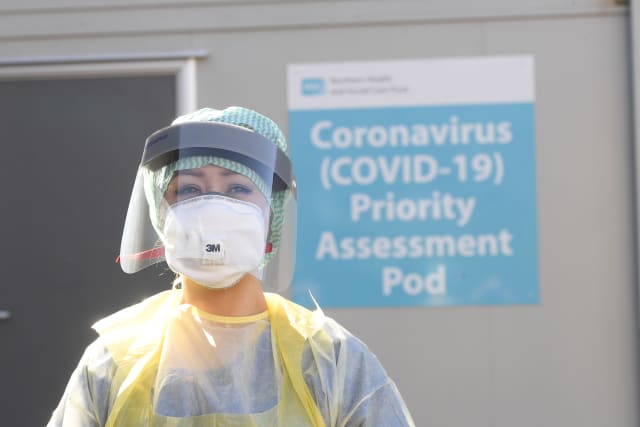 Keeping the NHS in personal protective equipment (PPE) has become the "21st century's Dunkirk", a researcher has said.

Referring to the evacuation of Allied soldiers from the beaches of Dunkirk during the Second World War, Professor Trisha Greenhalgh said that, because of a lack of PPE, staff are buying their own and people are helping out by making visors on 3D printers in garden sheds, creating masks on kitchen sewing machines and people are donating their own supplies to frontline workers.

It comes as NHS leaders thanked councils, police forces, dentists, vets and water companies for "stepping into the breach" and offering PPE supplies.

And a team of costume makers from the English National Opera are raising money to make scrubs for NHS workers.

Prof Greenhalgh from the University of Oxford, who is leading a series of reviews of research surrounding PPE, said: "As Covid-19 deaths in the UK continue to escalate, the main story about PPE in the UK, and in many other countries, has become the lack of it.

"Primary and secondary care are running low on various items of PPE.

"Other key workers such as porters and cleaners are, allegedly, not always being supplied with it.

"Staff are, they claim, being told to make theirs last longer.

"Some National Health Service staff claim they've been told to buy their own.

"The media is buzzing with stories of visors being 3-D printed in garden sheds, masks stitched together on kitchen sewing-machines, and small construction companies donating boxes of masks originally intended for use on building sites.

"Keeping the NHS in PPE has become the 21st century's Dunkirk."

In an editorial summarising the rapid reviews which have been conducted, she added that there is almost no "direct evidence" on the efficacy of PPE from research studies on Covid-19, but there is a lot of indirect evidence.

Saffron Cordery, deputy chief executive of NHS Providers – which represents NHS Trusts – said: "Trusts continue to help each other effectively and trust leaders are also hugely grateful to other local organisations with PPE supplies who are also stepping into the breach including councils, police forces, dentists, vets and water companies."

But she warned that some trusts are reporting "very low levels if gowns".

It comes after nurses were issued guidance which said they are "entitled to refuse to work" if they are not supplied with the appropriate protective kit to treat Covid-19 patients.

The Royal College of Nursing (RCN) guidance states there will be "difficult decisions" to be made by nursing staff if personal protective equipment (PPE) is not supplied.

New guidance from the College which states that if nurses have exhausted all measures to reduce their risk and they are still not supplied with the appropriate PPE, then they can refuse to work as a "last resort".

And the Nursing and Midwifery Council, said that nurses should make a record of decisions regarding how they handle any safety concerns.

In a statement, the nursing regulator said that if a concern is raised about nurses refusing to treat a patient because of their concerns about inadequate PPE, it would "consider the context of the current pandemic".

The NHSppe App has received input from more than 1,500 medics from 250 hospitals and GP practices across the UK.

Data collated on Tuesday morning from the app shows that:

– 38% of respondents reported no eye protection at all in the form of visors or goggles.

– Only 52% of doctors carrying out high risk aerosol generating procedures had the right long-sleeved gown.

During the daily Downing Street press conference, Chancellor Rishi Sunak and Public Health England's Yvonne Doyle rejected claims that firms had been told to restrict supplies of personal
protective equipment (PPE) to other parts of the United Kingdom in favour of England.

Mr Sunak said: "There's no truth in those stories, that those companies had been told to prioritise PPE equipment.

Our Retail Manager Helen collecting 20 protective visors from @SelbyHigh today to take back to the Hospice - thank you so much! pic.twitter.com/xsIcsisLLF

"Rather, the contrary is actually happening... there has been incredibly close collaboration between our four nations in this regard."

Prof Doyle said: "Public Health England has not, in any sense, directed any of the devolved administrations to be at any disadvantage.

"We work really closely together."