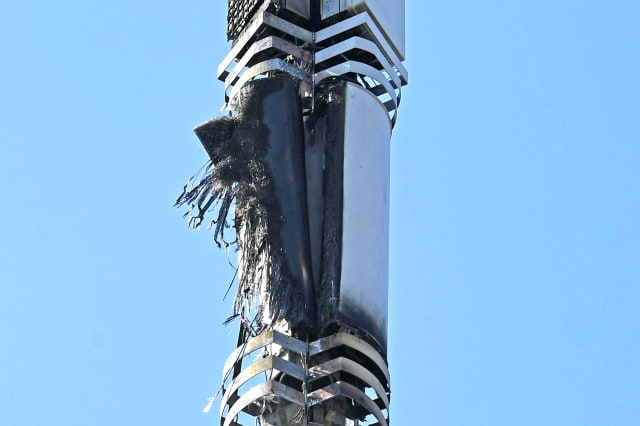 A mast providing mobile connectivity to the Nightingale hospital in Birmingham was among 20 suspected arson attacks against phone masts over the Easter weekend.

It comes amid a spate of mast fires, despite conspiracy theories linking 5G to coronavirus being widely condemned by scientists, Government and industry as unproven and "utter rubbish".

Two 19-year-old men and an 18-year-old man were arrested on suspicion of arson for a suspected arson attack on a mast in Dagenham.

Meanwhile, West Yorkshire Police are working with the fire service to determine the nature of mast fire in Huddersfield.

Vodafone chief executive Nick Jeffery said it was "deeply disappointing" to learn that arsonists are still attacking masts, including one serving the Nightingale hospital in Birmingham.

Mobile UK, the trade body which represents all network providers, said "careless talk could cause untold damage" following comments about the issue by Eamonn Holmes on Monday's edition of This Morning.

The Metropolitan Police was called to a telecoms mast fire on Becontree Avenue in Dagenham at 1.34am on Tuesday.

Some evacuations of residential properties were carried out as a precaution, but residents have since been allowed to return to their homes after the fire was extinguished, the Met Police said.

Four fire engines and around 25 firefighters attended the incident, which is the latest in a spate of suspected arson attacks targeting mobile masts around the country.

In Huddersfield, an incident in the early hours of Tuesday involving a phone mast attached to a chimney on Lower Quarry Road is being investigated.

West Yorkshire Fire and Rescue Service said the fire destroyed communications equipment belonging to three mobile network providers, one of which is used by the emergency services.

The cause of both incidents is not yet known, and it is not clear whether they involved 5G masts or older technology.

A spokesman for Mobile UK, which reported the 20 suspected arson attacks, said: "Theories being spread about 5G are baseless and are not grounded in credible scientific theory.

"Mobile operators are dedicated to keeping the UK connected, and careless talk could cause untold damage.

"Continuing attacks on mobile infrastructure risks lives and at this challenging time the UK's critical sectors must be able to focus all their efforts fighting this pandemic."

Ofcom said it will assess comments made by Holmes as a "priority", after the watchdog received more than 400 complaints.

On Monday, the 60-year-old weighed in on the ITV show after presenter Alice Beer branded the conspiracy theories "ridiculous" and "incredibly stupid".

He told Beer: "I totally agree with everything you are saying but what I don't accept is mainstream media immediately slapping that down as not true when they don't know it's not true.

The fire destroyed communications equipment belonging to three mobile network providers, one of which is used by the emergency services.

Holmes attempted to "clarify" his comments on Tuesday, saying: "Every theory relating to such a connection has been proven to be false and we would like to emphasise that.

"However, many people are rightly concerned and looking for answers and that's simply what I was trying to do, to impart yesterday.

"But for the avoidance of any doubt, I want to make it clear there's no scientific evidence to substantiate any of those 5G theories. I hope that clears that up now."

Since the beginning of April, West Midlands Police said it had received eight reports of telecommunications infrastructure being set on fire or otherwise vandalised in its region.

Although one incident is presently unconfirmed, all eight reports remain under investigation.