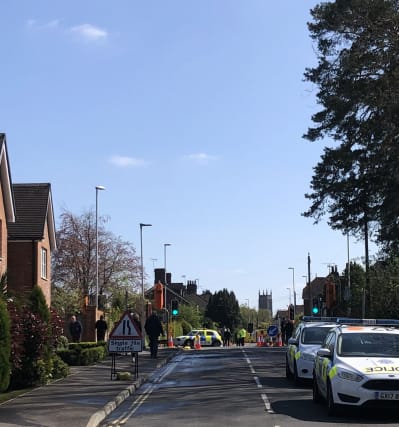 Armed police and paramedics were seen in East Grinstead after two men were injured in an assault.

Police are hunting a grey Fiat 500 which made off from the scene carrying a number of people.

One man was airlifted to hospital, while the other was taken by ambulance.

Residents of the West Sussex town were left shocked by what happened as the UK continues to be on lockdown from coronavirus.

It is not yet known whether weapons were used in the incident, which happened in Moat Road about 1.33pm, Sussex Police said.

“We saw a huge amount of police cars and ambulances come down Moat Road from London Road end.

“Then we walked over to see the road by Moat Pond by King’s field taped off and police with guns guarding the perimeter.

“We couldn’t see much, but then the ambulance brought a stretcher out and a police officer then told the disparate crowd to move on.”

Speaking to the PA news agency, she said she saw two police officers holding guns which made her think the incident was serious.

Ms Turk added: “I was a bit like ‘is this one of those stupid things where you are standing there to watch it and you are putting yourself at risk?’

“It really shocked me in terms of it being so dramatic and in a situation of where we should all be inside.”

A spokesman for Sussex Police said: “Two men suffered injuries, the nature and the scale of which have not been fully established at this time, but are not currently thought to be life-threatening. One of the victims is being airlifted to hospital.

It is believed that the incident is confined to a small group of people. Police are currently searching for a number of people who made off from the scene in a grey Fiat 500 and are investigating reports that weapons were used.

“Anyone with information about the incident is asked to report online or call 101 quoting serial 645 of 14/04.”