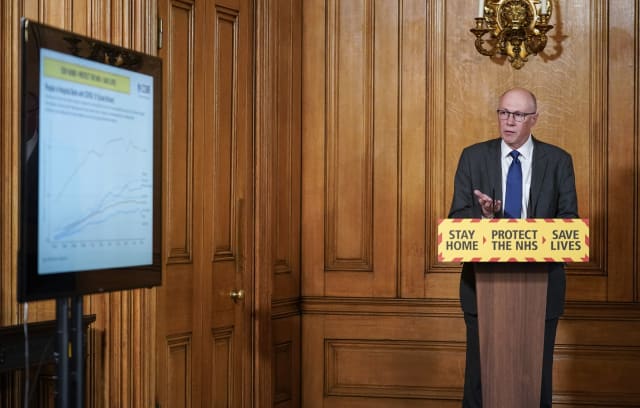 There is “increasing evidence” that the number of hospital admissions for Covid-19 are stabilising, NHS England’s medical director has said.

Professor Stephen Powis said the changes could be particularly seen in regions such as London and also the West Midlands, which have been hit particularly hard by the coronavirus pandemic.

Speaking at the daily press briefing, Prof Powis urged people to keep up social distancing, which was impacting on the infection rate.

He said: “This is evidence that is now accumulating that the benefit of that social distancing and reducing transmission is now beginning to be manifest in a stabilisation in hospital admissions.

“We are beginning to see the benefits of the undoubted hardship that we have all been asked to go through in terms of social distancing, in terms of not meeting with friends and family.

“It’s really important that those benefits are maintained, that we continue to follow the instructions that we have all been given and we will then get on top of this virus.”

Prof Powis urged the public not to become complacent, adding that lockdown compliance levels among the public are “very high”.

He added: “We need to keep it that way.

“We absolutely need to make sure that we keep the benefits of this going forward and we don’t take a foot off the pedal, we don’t become complacent.”

He said testing figures also suggest a “plateauing in the number of new cases”, though deaths will continue to rise due to the time lag between first onset of symptoms and patients dying.

Prof Powis also said work was ongoing to look at the number of Covid-19 infections being passed on within hospitals, though the data was not yet clear.

Patients with coronavirus in hospital are being separated from other patients and officials were “actively looking” at whether infection controls needed to be adapted, he said.

He added that the issue of Covid-19 being passed on between patients or staff and patients was being taken “very seriously”.

Asked about what may have been done differently if more had been known about the virus earlier, Public Health England’s medical director, Professor Yvonne Doyle, said she and her colleagues had worked seven days a week since at least mid January, sometimes all night in labs.

“We have learnt so much that I wish I had known in January, because undoubtedly we perhaps could have dome things differently but we have just worked tirelessly month in, month out and it has been a privilege to do so.

“One of the great questions for me is, ‘When was this virus first around?’ and if I had known that it would have been a wonderful public health gift to have been able to, perhaps, anticipate what it would do.”

She said that “every day, what we do we do in all sincerity for the benefit of the population”.

Prof Powis said he was sure everybody would want to look back to see what could have been done differently but it was too early to do so.

Chancellor Rishi Sunak said: “When you are faced with such an unprecedented challenges, are we going to be perfect on absolutely everything we do?

But he said those in Government were “constantly driven by the best interests of the country and keeping people safe.”