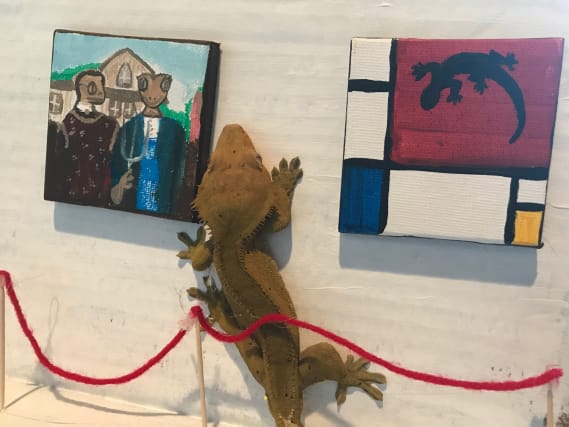 A gecko owner has made a tiny art gallery for her pet – complete with lizard-themed pictures.

Jill Scott, 21, was inspired to create the miniature museum for her pet gecko, called The Mayor, after seeing pictures on Twitter of someone attempting a similar project for their gerbils.

She told PA: “Somebody sent it to me and said ‘you should make one for your gecko’ and I was like ‘absolutely I should’.”

Ms Scott, a student from Dallas, Texas, took some of her favourite well-known paintings and created miniature gecko-themed versions of them.

She even gave them appropriate names, like Gecko With A Pearl Earring, American Gecko and Composition With Red, Blue, Yellow And Gecko.

She said they were selected at least in part for the ease with which they could have a gecko inserted into them – except for Grant Wood’s American Gothic.

“That one I just liked,” she said. “And I wanted to have him holding a pitchfork.”

When The Mayor was let loose in the museum he was initially a little tentative, Ms Young said, but she believes he enjoyed the change of scene.

“It was funny because he climbed under the little fake velvet rope I made, so he was just breaking rules from moment one,” she said.

“He climbed around on top of the paintings and I think that was his way of appreciating them.”

A video of her project, which she uploaded to TikTok, has been viewed more than a million times.

Ms Scott, who hopes to be an actor, was supposed to be coming to the end of her degree around now and was studying in Los Angeles before being forced to return home because of the coronavirus pandemic.

“It’s easy to get into a funk now that everything’s just stalled, but having projects like this which are small and fun and make people happy has been a good way to distract myself from all that,” she said.

For any other gecko owners who would like to make a museum for their pet, Ms Young has created a printable kit, which is for sale on her Etsy page, The Crafty Mayor.