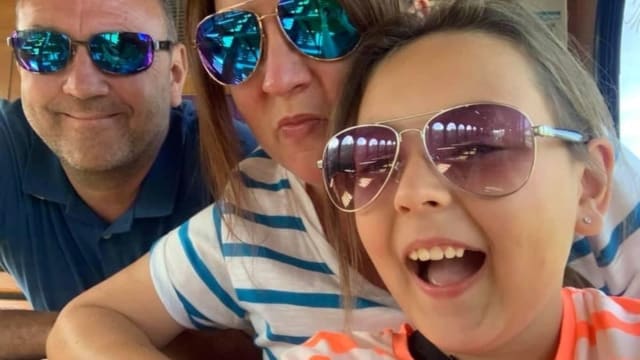 The family of a “devoted dad” who died after appearing to have recovered from Covid-19 have described how he suffered a sudden relapse before he died as he was being rushed to hospital.

Dom Merrix suffered a heart attack after he had a rapid decline in his health which left him struggling to breathe at his home in Portsmouth, Hampshire.

The 48-year-old had been in self-isolation for 16 days after he began to suffer the symptoms of the coronavirus although he was not tested for it.

His partner of 11 years, Sarah Merrix, 44, and their 10-year-old daughter Ellie-Mai had been living in the upstairs of their house while he remained downstairs.

Family friend Rachel Hibbert said: “He got up as normal and wanted to have a shower.

“Then bang out of nowhere it happened.

“He texted his daughter to open the windows because he was struggling to breathe.

“He then texted Sarah begging for help.

“Sarah came downstairs and found him on his hands and knees struggling to breathe.

“When the paramedics arrived they put him on the trolley and asked him to lean back but he couldn’t do it.

“That was it. Then the doors to the ambulance shut. They didn’t see him alive again.

“His heart stopped and the paramedics spent 20 minutes outside the house trying to get it started again.

“By the time he got to hospital they couldn’t bring him back.”

Ms Hibbert said Mr Merrix’s family said that his death was a warning that people of all ages can fall victim to the virus.

She said: “People think it isn’t going to happen to them because they’re fit and young.

“Dom was fit and young and it killed him.

“It’s torn his family apart and left them devastated.”

The family are organising for a blue Pompey coffin for Mr Merrix who was a lifelong Portsmouth Football Club fan.

A fundraising page has also been set up to support the family at: gofundme.com/f/support-sarah-and-elliemai