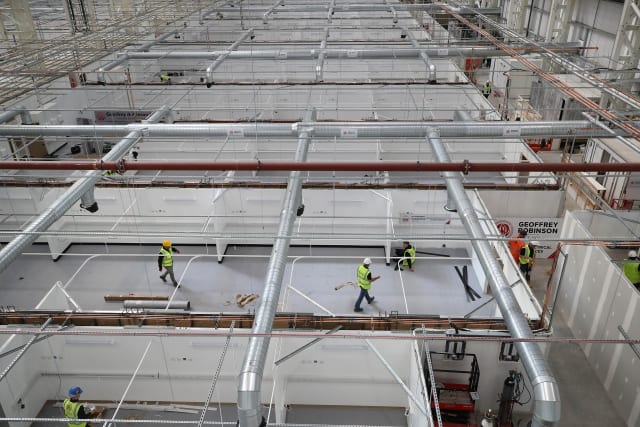 More than one in five deaths recorded in England and Wales are now linked to coronavirus, new figures show.

Data from the Office for National Statistics (ONS) shows Covid-19 was mentioned on 3,475 death certificates in the week ending April 3, including hospital, care home and community deaths.

This means coronavirus has pushed the death toll in England and Wales to its highest level since official weekly figures began in 2005.

As those figures were published, it emerged that impact of lockdown could see the UK economy plunge 35% between April and July with unemployment expected to hit 3.4 million – around one in 10 of the working population – if the lockdown lasts three months, followed by a partial lifting for three months.

Experts at the independent Office for Budget Responsibility (OBR) added that, on its new prediction, GDP will then jump 25% in the third quarter and a further 20% in the final three months of 2020.

The ONS figures showed that, in the week to April 3, some 16,387 people died in England and Wales, an increase of 5,246 deaths compared with the previous week and 6,082 more than the five-year average.

But care home providers have warned they are seeing a higher number of cases and deaths than are officially reported, in part due to a time lag with the ONS figures.

MHA, a charitable operator, said there had now been 210 deaths across 131 of its homes, with outbreaks in about half of its homes.

And around two thirds of care homes run by Britain’s largest care home operator HC-One have seen cases of Covid-19.

He said the figures are a “more realistic picture” of what is going on in care homes across the UK than official figures suggest.

He said 311 residents and one member of staff had died, and Covid-19 was responsible for about one in three elderly deaths at HC-One’s care homes in the last three weeks.

It comes after the Department of Health and Social Care told the PA news agency on Tuesday lunchtime that there had been coronavirus outbreaks at 2,162 care homes in England.

The ONS figures show that around one in 10 of all deaths involving Covid-19 now occur outside hospitals.

A total of 406 deaths involving Covid-19 in England and Wales occurred outside of hospitals between the start of the year and April 3.

On Monday evening, Channel 4 News reported that a whistleblower working on death registrations in the south of England said deaths were not being properly recorded.

The whistleblower suggested some GPs thought patients had died of Covid-19 but recorded the death as another cause, such as dementia, as they had not seen the patient recently.

Nadra Ahmed, chairwoman of the National Care Association, told ITV’s Good Morning Britain on Tuesday that care homes are struggling to source and pay for personal protective equipment (PPE) for staff, and prices are “not sustainable” for the care sector.

She said the Government had removed VAT on essential kit for the NHS and urged it to do the same for the social care sector.

Shadow social care minister Liz Kendall said ministers must now “publish daily figures of deaths in care homes so we know the true scale of the problem and how fast it is spreading”.

But Work and Pensions Secretary Therese Coffey said on Tuesday she thinks the current system is fair.

She told the Today programme: “I think that the certification by doctors is happening regularly, that is being collated by the ONS and it is being published weekly by the ONS.

“I think that is a fair system of getting that picture, that unfortunate picture, across the country of where deaths are happening due to coronavirus, and I think that is a trustworthy way to go about this by the medical certificates signed off by doctors.”

Ms Coffey also said “people will need to wait” to find out when lockdown measures across the UK will be lifted as more data on how the measures are working is gathered.

She added: “There are legislative elements which will need to be sorted out at the appropriate time, but we will continue to review the evidence.

“I’m conscious that people would like to know sooner but it would be irresponsible of the Government to just issue messages now without having been through that assessment and the recommendations and careful consideration of it.

“So people will have to just wait a little bit longer and more will be said at the end of this week.”

The Scientific Advisory Group for Emergencies (Sage), which advises ministers, is due to hold its regular meeting on Tuesday to discuss the Covid-19 pandemic.

It comes as the World Health Organisation (WHO) said lockdown restrictions should be lifted slowly and not “all at once”, to avoid a resurgence of the virus, and only if appropriate measures are in place, including “significant” capacity for contact tracing.