Scientists discover supernova that outshines all others 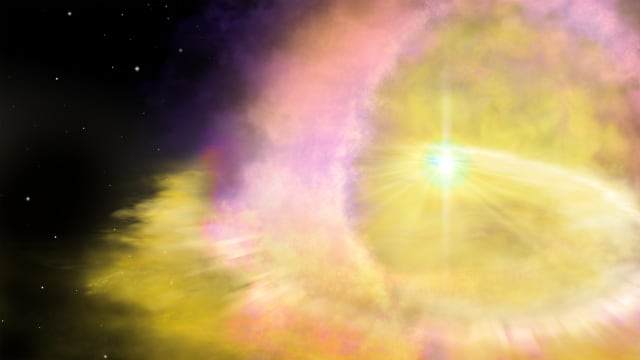 Scientists believe they have discovered a supernova that is brighter and more energetic than any previously recorded.

A supernova is the explosion of a star and it is the largest explosion that takes place in space.

Now an international team of astronomers, led by University of Birmingham scientists, believes that a rare occurrence that was possibly triggered by two massive stars which merged before the explosion has led to “the most light we have ever seen emitted by a supernova”.

The findings about the supernova, dubbed SN2016aps, are published in Nature Astronomy.

The team, which also includes experts from Harvard, Northwestern University and Ohio University, suggests the supernova could be at least twice as bright and energetic, plus also bigger than any yet recorded.

They observed the explosion for two years, until it faded to 1% of its peak brightness.

Using these measurements, they calculated the mass of the supernova was between 50 to 100 times greater than our sun.

Typically supernovae have masses of between eight and 15 solar masses.

Supernovae can be measured by the total energy of the explosion, and the amount of that energy that is emitted as observable light, or radiation, according to lead study author Dr Matt Nicholl, of the University of Birmingham.

He said: “In a typical supernova, the radiation is less than 1% of the total energy.

“But in SN2016aps, we found the radiation was five times the explosion energy of a normal-sized supernova.

“This is the most light we have  ever seen emitted by a supernova.”

The team believes that an explosion which was more energetic than usual may have helped to make it so bright.

The scientists, who examined the light spectrum, say the explosion was powered by a collision between the supernova and a massive shell of gas, shed by the star in the years before it exploded.

“This can be powered by a process called the pair instability, which has been a topic of speculation for physicists for the last 50 years.

“If the supernova gets the timing right, it can catch up to this shell and release a huge amount of energy in the collision.

“We think this is one of the most compelling candidates for this process yet observed, and probably the most massive.”

Dr Nicholl notes that much of the gas that was detected in SN2016aps was hydrogen, which may “puzzle” scientists as they may assume this would have been lost via stellar winds long before it started pulsating.

Dr Nicholl said: “One explanation is that two slightly less massive stars of around, say 60 solar masses, had merged before the explosion.

“The lower mass stars hold onto their hydrogen for longer, while their combined mass is high enough to trigger the pair instability.”

The research was funded through a Royal Astronomical Society Research Fellowship, along with grants from the National Science Foundation, Nasa and the Horizon 2020 European Union Framework.

Study co-author Professor Edo Berger, of Harvard University, added: “Now that we know such energetic explosions occur in nature, Nasa’s new James Webb Space Telescope will be able to see similar events so far away that we can look back in time to the deaths of the very first stars in the universe.”