Bobby the wounded fox cub has brush with the law 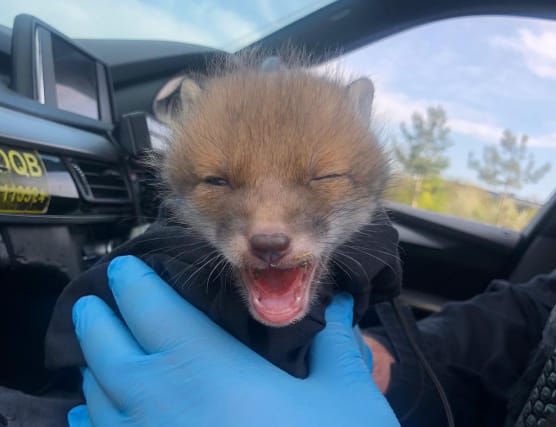 Kind-hearted officers from the Metropolitan Police’s SCO19 Specialist Firearms Command looked after the fox, which they named Bobby, after being alerted to his plight by members of the public while on patrol in Southwark.

Bobby, who is about four to five weeks old, is thought to have been attacked and was found with a bite on the end of his tail in Burgess Park.

He has since been handed over to The Fox Project, a charity devoted to rehabilitating and fostering foxes for release in the wild.

And he is “on the way to making a full recovery” after his brush with the law.

Adorable pictures show Bobby wrapped in a bundle sitting comfortably on an officer’s knee, with his eyes barely open.

MPS Firearms Command tweeted: “Whilst on patrol in the Southwark area yesterday, #SCO19 officers were flagged down by concerned members of the public who had come across this distressed baby fox.

“With no sign of his parents, officers cared for it until The Fox Project could take over.”

Posting an update, the team added: “Update from #TheFoxProject charity is that baby fox “Bobby” is doing well and is on the way to making a full recovery.

“Once he is ready, he’ll be reintroduced back into the wild.”

The tweet earned the officers praise with one impressed follower posting: “Respect. I am always impressed by how officers with such heavy responsibility remain humane.”

Fox Project ambulance driver Tamsyn Varley said of Bobby: “We were worried about him yesterday, he wasn’t able to move properly, he couldn’t move his front legs.

“I think he was in shock.

“But this morning he was fine. He is on antibiotics and he can walk which is the main thing.”

Bobby will hopefully be released into the wild in August or September.

The Fox Project, based in Kent, cares for 800 foxes including 250 cubs every year.