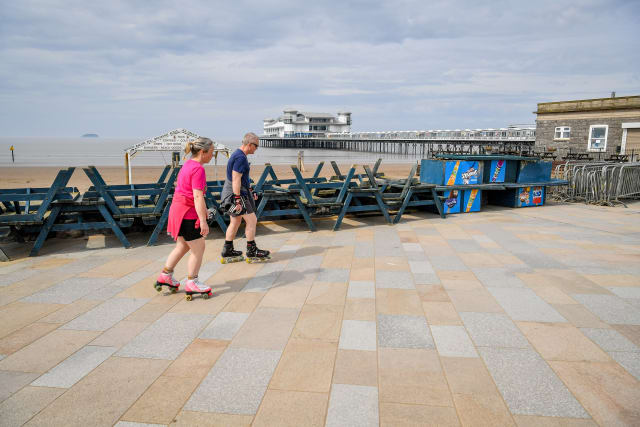 Britain is set to be lashed by heavy downpours and thunderstorms as the unseasonal hot spell comes to an abrupt end.

Beaches and parks remained deserted for most of the Easter weekend, and police praised people for staying at home despite the glorious sunshine as part of efforts to halt the spread of coronavirus.

Health Secretary Matt Hancock told Sunday's Downing Street press conference that the future path of the Covid-19 pandemic would be "determined by how people act", adding: "I'm really glad that at the moment the British people this weekend are doing their bit."

The Met Office has issued a yellow thunderstorm warning until 11pm on Sunday across central England and northern Wales amid concerns over flooding.

Homes and businesses in major cities including Birmingham and Nottingham face damage from rapid floodwater as well as lightning, hail and strong gusts.

And the treacherous conditions could see road closures and transport delays.

Temperatures are set to plunge from 26C on Good Friday, officially the hottest day of the year so far, to an average of 13C on Easter Monday.

And some parts of the UK will struggle to reach double figures, forecasters predict.

Met Office meteorologist Emma Salter said: "Tomorrow is going to be a bit of a shock to the system for some places, it's going to be dry but will feel really cold for England and Wales, with a drop in temperature.

"There will be plenty of sunshine but it will be breezy.

"A lot of places in England and Wales will struggle to get to double figures."

London will reach 13C and it is expected to be slightly warmer (around 15C) in Devon and Cornwall.

Most of Britain is expected to enjoy dry sunny spells for the rest of the week, with the exception of northern Scotland.

However, high pressure – which serves as a shield to deter rain – will break down by the coming weekend, with north west and southern areas at most risk of a washout.

Other areas are set to remain largely dry and settled, with temperatures staying above average, reaching the mid to high teens.

It comes as the mercury reached 25C in Kew Gardens on Sunday, not far off the 25.3C Easter Sunday record set in Solent, Hampshire, on April 24, 2011.

Despite the scorching temperatures, it appears many people heeded the Government's Covid-19 stay-at-home advice – with bank holiday hot spots deserted and motorways empty.

Police forces across the UK shared images of deserted public spaces after people were urged to stay at home to protect themselves, others and the NHS from Covid-19 by reducing the opportunities for the virus to spread.

Mr Hancock reiterated the importance of complying with lockdown regulations as he wished the nation a Happy Easter.

Wishing everyone a Happy Easter. Thank you to everyone supporting our national effort - from all those working in our NHS to those staying home. #StayHomeSaveLivespic.twitter.com/GnGaRKtJPp

He posted a video on Twitter urging people to continue following the social distancing rules.

He said: "Stay at home. That way you protect the NHS and you're doing your part to save lives."