Survivors remember the horrors of Bergen-Belsen 75 years after liberation 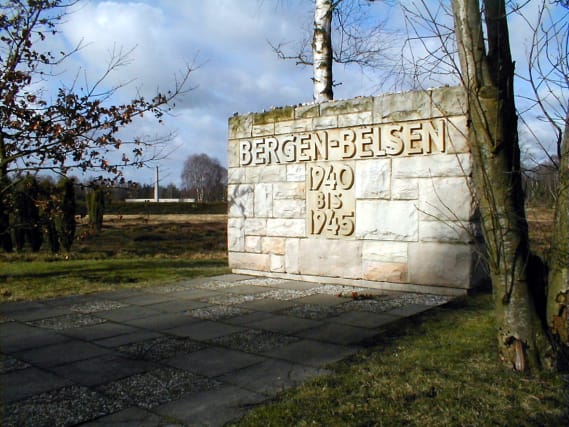 A Holocaust survivor says the coronavirus pandemic might help remind the world “people are people” and slow the rise of populism.

Speaking on the 75th anniversary of the liberation of the Bergen-Belsen concentration camp in northern Germany, Anita Lasker-Wallfisch said Covid- 19 “might wake people up to have better attitudes towards each other”.

The first camp to be liberated by British troops, the horror of Belsen was on such a scale the BBC initially refused to broadcast the full report by journalist Richard Dimbleby for fear of distressing listeners.

The broadcaster, father of Jonathan and David, said he had “passed through the barrier and found myself in the world of nightmare”.

Describing one prisoner, he said: “She was a living skeleton, impossible to gauge her age for she had practically no hair left, and her face was only a yellow parchment sheet with two holes in it for eyes.”

Footage of the piles of emaciated bodies left outside the camp’s wooden huts soon followed Dimbleby’s report, revealing to the British public for the first time the reality of the Nazis’ “final solution”.

It is estimated more than 60,000 people died at the camp under Nazi rule, and a further 14,000 of the 60,000 living prisoners found by the British were so frail they perished in the weeks after liberation.

Diarist Anne Frank and her sister Margot are among the camp’s most famous victims – believed to have died between February and March 1945 from typhus.

Mrs Lasker-Wallfisch, now 94, was an inmate at Auschwitz before being crammed on a train to Belsen with 3,000 others as the Red Army marched on the notorious extermination camp.

She told the PA news agency: “People always ask me: ‘Was Belsen better or was it worse than Auschwitz?’ It was just different. Belsen was not an extermination camp.

“In Auschwitz people were murdered in the most sophisticated manner, in Belsen they didn’t need that. In Belsen you just simply perished. That was the difference between the two camps.”

“It was total chaos. The end of the world.”

When asked, with populism on the rise, the world might be in danger of forgetting the lessons of the holocaust, she said: “Of course, we are all worried, but we are worried about something else now.

“We are worried about coronavirus and maybe the end result of this disaster, which is a world disaster, might wake people up to have better attitudes towards each other.”

She added: “Maybe with what is happening now in the world where everyone is affected, maybe people will wake up and realise that people are people – human beings.”

Mrs Pollack, 89, had been sent to work in a munitions factory after undergoing the “Selektion” process at Auschwitz which determined who would be forced into labour and who would be killed immediately.

She arrived at Belsen after being forced on a “death march” with thousands of other prisoners as the Nazis retreated westward over the course of 1945.

Mrs Pollack said: “How could we imagine a death camp of that magnitude? Most of us died from hunger, from disease and from total neglect.

“When the British came and liberated us I was already a corpse, full of lice, but I remember the first time in almost a year the gentleness, kindness.

“Somebody lifted me up and placed me in this little ambulance – how was that possible? By then I was so dehumanised.”

“I don’t remember what he said because my cognitive perception was gone but that was the first time I think that somehow I felt a spark of hope.”

Mrs Pollack said of the liberators: “Fantastic people. I am grateful forever for what they have done for us survivors – those battle-worn soldiers.”

Events to mark this year’s anniversary were cancelled due to the pandemic, but the Holocaust Educational Trust (HET) and many other charities are working hard to keep the memory of what happened alive.

She added: “I’m proud of the fact we have got generations of young people who feel quite strongly that it is their job not just to carry the legacy of the survivors, not just to remember that it happened, but also to protect the truth of the Holocaust.”