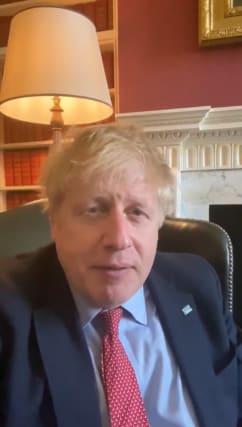 Prime Minister Boris Johnson has been discharged from hospital a week after being admitted with persistent coronavirus symptoms.

But Downing Street said he would not be returning to work immediately on doctors' orders and would instead head to his country residence in Buckinghamshire to recuperate.

A Number 10 spokesman said: "The PM has been discharged from hospital to continue his recovery at Chequers.

"On the advice of his medical team, the PM will not be immediately returning to work.

"He wishes to thank everybody at St Thomas' for the brilliant care he has received.

"All of his thoughts are with those affected by this illness."

The announcement about the PM's discharge from hospital prompted his fiancee Carrie Symonds to tweet in praise of the "incredible" staff at St Thomas' Hospital in London.

I cannot thank our magnificent NHS enough. The staff at St Thomas' Hospital have been incredible. I will never, ever be able to repay you and I will never stop thanking you. 🌈

Ms Symonds, who is expecting the couple's baby, said: "I will never, ever be able to repay you and I will never stop thanking you.

"There were times last week that were very dark indeed. My heart goes out to all those in similar situations, worried sick about their loved ones.

"Thank you also to everyone who sent such kind messages of support. Today I'm feeling incredibly lucky."

The news about the PM came as the death was announced of Goodies star Tim Brooke-Taylor, 79, who had contracted coronavirus.

Tributes flooded in for the actor and comedian, who was described by Jack Dee as a "charming, quick witted and a hugely skilful comic".

Dee said: "It's always heartbreaking to lose a loved one, but these times have created the cruellest of circumstances for that to happen in."

The UK hospital death toll of patients with Covid-19 was poised to pass 10,000 on Sunday as the row about availability of protective equipment for health care workers continued to rage.

Business Secretary Alok Sharma's said health staff should not be put in a position where they have to consider withdrawing care due to a lack of protection.

Mr Sharma's comments follow continued criticism of the Government's supply of personal protective equipment (PPE) to staff on the frontline of the pandemic.

The Royal College of Nursing (RCN) has piled more pressure on ministers after it urged members to refuse to treat patients as a "last resort" if adequate PPE was not provided.

Mr Sharma said demand for PPE was well beyond anything like what it would be outside of a pandemic and that there was a "unified effort" to deliver more supplies.

Meanwhile, Commons Leader Jacob Rees-Mogg has confirmed that Parliament will return to action on April 21 as planned following its four-week Easter break.

It follows pressure from Labour to stick to the scheduled return so MPs can probe ministers on their handling of the Covid-19 crisis, along with seeking answers regarding a possible exit strategy from the lockdown measures.

Mr Sharma indicated there would be no lifting of the restrictions on movement until the Scientific Advisory Group (Sage) has met this week.

"We are starting to see these measures work but they will stay in place until we have advice from Sage in terms of the evidence that is out there," he said.

Sir Jeremy Farrar, director of the Wellcome Trust, said the UK looked set to have "one of the worst, if not the worst" death rate in Europe.

He was critical of the Government's decision to stop community testing early on during the virus' spread, saying it could have provided a "critical six to eight week" buffer to allow the NHS to be better prepared.

Isaacs: Performing venues ‘keep the soul of the nation alive’

Amber Heard felt she was ‘above the law’, ex-aide claims