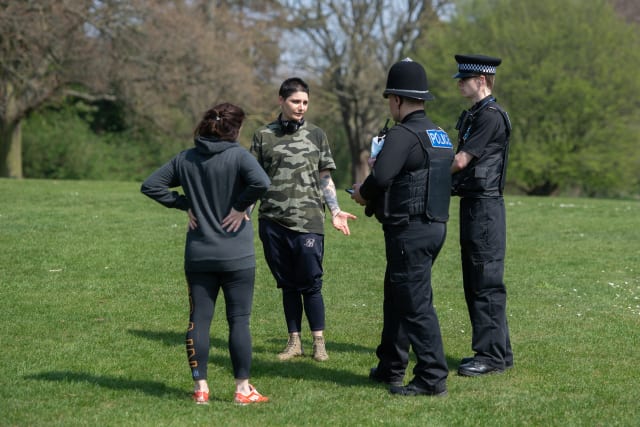 The public’s behaviour in terms of heeding the Government’s instructions to leave the house only for a limited number of essential reasons has largely improved, according to the Evergreen Life app.

Its data suggests areas which last weekend were reporting comparatively high levels of rule-breaking have largely changed their ways.

The data is based on almost 75,000 responses from 34,444 health and wellbeing app users about how they are responding to the Government advice.

Middlesbrough, which last weekend was the area on the app where people were most likely to flout the stay at home rules, saw the number of respondents who admitted they were not complying drop from 25% to 13%.

Those behind the app said reported symptoms also appear to be falling, as people stick more closely to the rules.

The number of people reporting Covid-19 symptoms in Middlesbrough fell from 10% to 7%.

Elsewhere, non-compliance with social distancing also dropped in Hertfordshire, from 18% to 9%, and in Burnley, from 18% to 14%.

Not everywhere saw an improvement though, as Enfield’s non-compliance figure rose slightly from 18% to 19%.

The anonymised data is being shared with the NHS and data scientists at the universities of Liverpool and Manchester to help them analyse the progress of the pandemic.

Evergreen Life’s chief executive officer Stephen Critchlow said: “We can see that Evergreen Life users, who get regular nudges to remind them of the benefits of staying at home, are generally following Government guidelines and those that were not have improved dramatically.

“Soon we will be able to assess whether this type of app helps the community who use it to stay well.

“We are also monitoring those with symptoms consistent with Covid-19. These appear to be falling as compliance improves. I am looking forward to the data being fully analysed by our university partners to assess this.”

The app’s developers said for an area of the country to appear on the map, it had to have enough people in the sample sizes for the percentages quoted to be statistically significant.

Professor Iain Buchan from the University of Liverpool, who is among the researchers analysing the data, said the findings can help gauge the effect of the lockdown.

He said: “This is also an important way to explore how the control measures are affecting health and wellbeing. Right now, the more people who report their symptoms and experiences in this way, the more information local services have to best prepare themselves.

Evergreen Life, which said it is linked to 99% of GPs in England, has been working with the NHS since 2015.