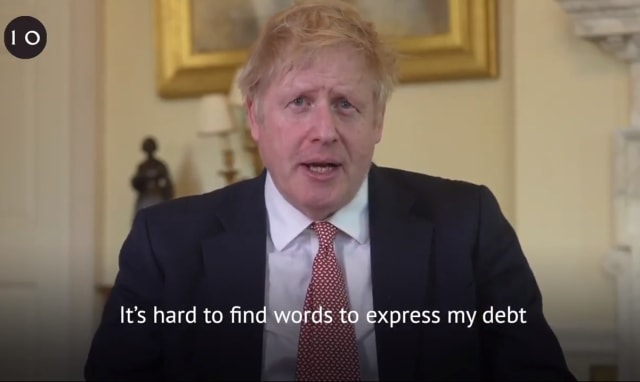 Boris Johnson has paid tribute to the NHS, saying there is “no question” it saved his life after he contracted coronavirus.

The Prime Minister, speaking in a video released shortly after he was discharged from hospital, admitted there was a 48-hour period when things “could have gone either way”.

Downing Street had insisted the PM was in “good spirits” even after his admission to intensive care, where he spent three of the seven nights in St Thomas’ in central London.

In a tweet following her fiance’s release from hospital, Carrie Symonds said there had been some “very dark” times in the past week.

Speaking in the video message posted online Mr Johnson thanked the “utterly brilliant” doctors, and praised the nurses for their “astonishing” care.

The PM, who was wearing a suit, will not be returning to work immediately on doctors’ orders, instead recuperating at Chequers, his country residence in Buckinghamshire.

He said the NHS would be “unconquerable” in the face of the coronavirus pandemic.

He said: “I have today left hospital after a week in which the NHS has saved my life, no question.

“It’s hard to find the words to express my debt – but before I come to that, I want to thank everyone in the entire UK for the effort and the sacrifice you have made and are making.”

He thanked people for continuing to socially distance and to self-isolate, saying: “I do believe that your efforts are worth it, and are daily proving their worth.”

While he said the “the struggle is by no means over”, he appeared to offer some hope by adding that progress is being made.

He said: “We are making progress in this national battle because the British public formed a human shield around this country’s greatest national asset – our National Health Service.”

Mr Johnson said he had personally “seen the pressure the NHS is under” and listed the essential staff including cleaners, cooks and all healthcare workers who he said had shown “personal courage” by continuing to work and “risking this deadly virus”.

He said: “It is thanks to that courage, that devotion, that duty and that love that our NHS has been unbeatable.”

The Conservative Party leader mentioned by name the medics who had looked after him, particularly “two nurses who stood by my bedside for 48 hours when things could have gone either way”.

Naming them as Jenny from Invercargill  on New Zealand’s South Island and Luis from Portugal, near Porto, Mr Johnson gave an insight into just how serious things had become at one stage.

He said: “The reason in the end my body did start to get enough oxygen was because for every second of the night they were watching and they were thinking and they were caring and making the interventions I needed.”

Shortly after news of his release, Ms Symonds had tweeted to pay tribute to the “magnificent NHS”.

She said: “I will never, ever be able to repay you and I will never stop thanking you.

“There were times last week that were very dark indeed. My heart goes out to all those in similar situations, worried sick about their loved ones.

“Thank you also to everyone who sent such kind messages of support. Today I’m feeling incredibly lucky.”

Stanley Johnson said he was delighted by the latest update, telling the PA news agency he hopes his son “does not overdo it” while recovering at Chequers.

Mr Johnson, who is at his farm in Exmoor, said: “I am absolutely delighted to hear the news that Boris has left hospital – it is wonderful news.

“Of course it is not only me who is delighted but the whole family.

“I am especially pleased that he will now be able to be with his fiancee Carrie, and if they head to Chequers I very much hope he doesn’t overdo it.”

He also praised the NHS for the care they gave his son.

He added: “I realise now – I think the whole country realises – how close he came to a crisis situation and it is wonderful he has come out of that crisis.

“It is wonderful that the national health service was able to help him and I think he has also paid tribute to them.

“Our thoughts are with everybody, not only those who are fighting the battle against coronavirus, but those who are suffering from it.”

He said: “It is a great credit to the exceptional professionalism of clinical teams, as well as everyone in the wider organisation, that we have been able to care for the Prime Minister so effectively, whilst continuing to deliver equally high standards of care to all of our patients.”

He said thoughts must “turn immediately to those who still need our help at this time” and reiterated the plea for people to “stay home to help us save lives and protect the NHS”.