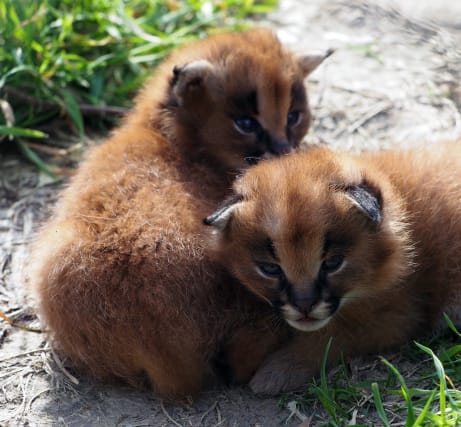 A pair of African wild cats have been born at a British zoo.

The two caracals – an African species that lives on the grasslands – were born at Exmoor Zoo in Devon.

The kittens, who are yet to be named as their sex will not be known for several weeks, are already outside with their parents, called Yoda and Yoda’s Wife.

Due to the warm weather, their mother is keeping her kittens outside from early morning all day in the dry grass and under the natural shelter of bushes in their zoo habitat.

The kittens already have their eyes open, but are still spending most of their day asleep. However, the keepers have seen the babies playing and taking their first steps.

As dusk falls, they return to their den for the night.

Zoo co-owner Danny Reynolds said: “With only four UK zoos exhibiting this species and only one other unrelated pair it is becoming vitally important to breed and maintain this species in captivity.

“We have no names yet for the two kittens, and to be fair we never gave mum a name either.

“She has always been ‘Yoda’s Wife’. Anybody out there got some suggestions? Not too provocative and preferable not gender-biased for the kittens as we will not be able to sex them until they are about 12 weeks old.

“This has cheered us up no end in all the doom and gloom of the Covid-19 pandemic, and surprisingly enough all the remaining keepers we have, seem to be able to find an excuse to wander by the enclosure and enjoy the sight and sounds of the kittens.”

Caracals look like another species of cat called the lynx but the only thing they have in common is similar ears.

Caracals occur in Africa and are more closely related to the original African wild cats.