Twins join forces to help save lives on Covid-19 frontline 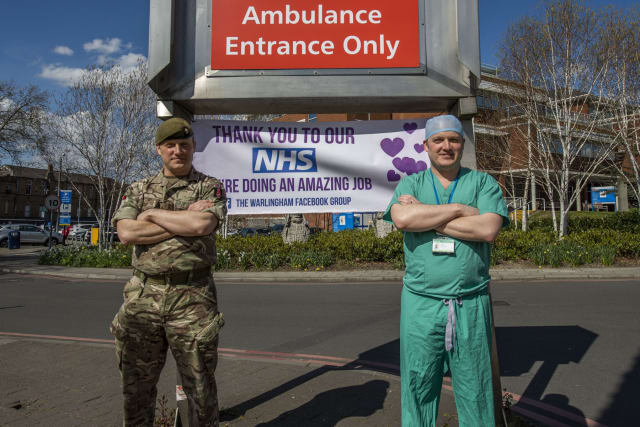 Twin brothers, one a soldier and the other a surgeon, have both played a role in the battle to set up and run London’s temporary NHS Nightingale hospital.

British Army Lieutenant Colonel Phill Moxey, Commanding Officer of 1st Battalion, The Royal Anglian Regiment, led a team which helped to transform part of the Excel Centre into a hospital.

His brother Paul, a vascular surgeon at the capital’s St George’s Hospital, is currently on call to aid the new Nightingale facility’s dedicated medical team.

The Suffolk-born twins, aged 42, made radically different career choices as children and this is the first time their individual skills have been brought to bear on the same mission.

Lt Col Moxey, the older of the brothers by 20 minutes, who has served on operations in Northern Ireland, Iraq and Afghanistan, said: “Our soldiers have thrown themselves in to this effort with passion and energy to make sure our teammates across government and, most importantly, the NHS get what they need.

“We have had their backs from the start and we will stay in it with them together until the end.”

Up to 160 soldiers from five different Army units worked at the ExCel Centre during the build phase and 1st Battalion, The Royal Anglian Regiment, will remain alongside the NHS as the new hospital admits patients.

Paul Moxey, who will be on call to help NHS Nightingale’s medical staff and review patients, said: “I think the Nightingale is a triumph for NHS England and the Army team that have put it together so quickly.

“It shows what we can do as a country when we put our minds to it and has taught the NHS a lot about breaking out of the silos we all work in and collaborating with other teams to achieve a common goal. Long may it continue after Covid is defeated.”

Father-of-three Paul, who is married to a nurse, said: “Our junior doctors have been taken to support intensive care, so we have had to relearn the administrative tasks that dog a junior doctor’s life.

“Having said that, there is a great atmosphere of camaraderie and team work at St George’s, and the vascular surgeons are very happy to possess the skills to help support our ICU colleagues with vascular access procedures and do our part in this crisis.”

Lt Col Moxey, also a married father-of-three, added: “It’s not lost on either of us the apparent utter contrast in our chosen professions – soldier versus surgeon.

“But both roles have taken many years of experience to get to and both have required a degree of sacrifice, patience and tolerance on the home front.

“Neither of us could have got to where we are without the support of our families. Both roles require calmness under pressure, leadership and constant education.”