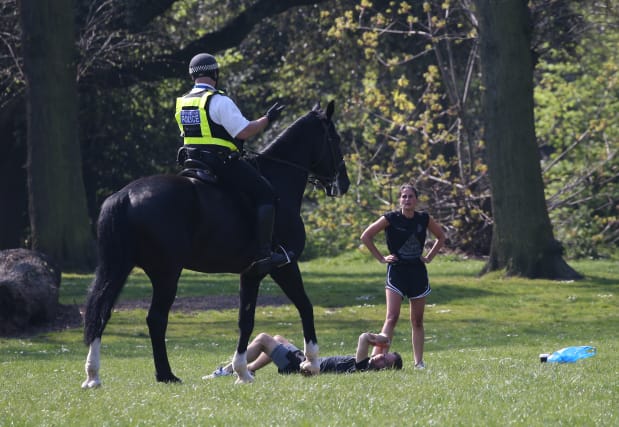 Recorded messages, mounted police and volunteer wardens with megaphones have been welcoming locals in east London’s reopened Victoria Park, urging them to follow new social distancing measures in the wake of the coronavirus pandemic.

Signs bearing new rules at the hugely popular public space informed people of a ban on picnics, ball games and sunbathing, with cyclists being told to dismount upon entry.

Announcements could also be heard over loudspeakers telling people to follow the measures or face being moved on or fined.

The park and Tower Hamlets council came in for intense criticism three weekends ago after pictures posted on social media showed a local market in the grounds bustling with people despite government guidance to practice social distancing.

The furore, which occurred days before a nationwide lockdown came into effect, prompted the park to shut for a fortnight, before reopening on Saturday with restrictions in place.

Speaking to PA inside the park two hours after it reopened, Tower Hamlets mayor John Biggs said he had “had it in the neck from lots of people who are unhappy that we closed it”.

“That’s because there were a minority of people who were not following the rules.”

However, the closure of the biggest park in one of the nation’s most densely populated boroughs led to increased congestion on nearby streets and canals.

“Like a lot people in London we have learned things … we can’t get everything right,” Mr Biggs said.

“With the coronavirus, it (the high population) means there’s a higher risk of things spreading, and I suppose it’s no accident that London is ahead of the curve.”

“There’s been a lot of frustration that it’s been closed, we’re a very dense borough,” he added. “People need some space to breathe.”

East London has been associated in recent years with the emergence of hip cafes and artisan markets, many of which have taken a hit following the government’s measures to tackle the pandemic.

While some have shut down entirely, others have continued to thrive despite the restrictions.

The popular Ginger Pig butcher just north of Victoria Park had a queue stretching around the block on Saturday as it continued serving with limits on how many customers could enter the store at one time.

Mr Biggs said that with so many people in the area, it was difficult to prevent large queues at peak times.

“We had a supermarket in another part of the borough where the queue was half a mile long, which is clearly ridiculous.

“We need to recognise that, particularly at weekends, people are finding it tough.”