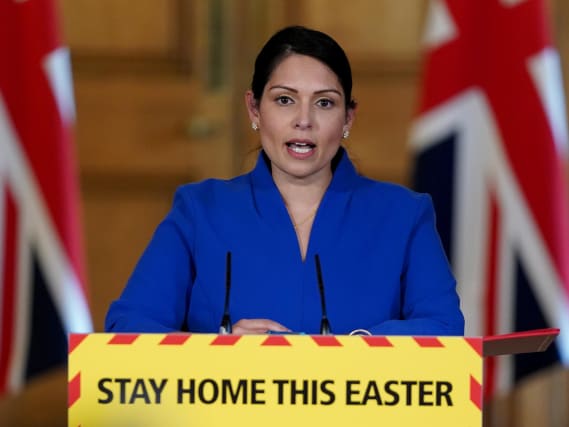 The Home Secretary has kicked off a public awareness campaign to ensure those experiencing or at risk of domestic abuse know of the help on offer.

Priti Patel, in addition to announcing the campaign on Saturday, has also revealed talks are ongoing to provide charities and the Domestic Abuse Commissioner with an additional £2 million to bolster domestic abuse helplines and online support.

The fresh injection of cash is aimed at ensuring victim support is available after charities reported a surge in activity since the social distancing guidelines came into force almost three weeks ago.

The Government’s public awareness campaign, under the hashtag #YouAreNotAlone, will aim to reassure those affected by domestic abuse that support services remain available during the UK lockdown.

The Home Office is encouraging the public to show their solidarity and support for those who may be suffering by sharing a photo of a heart on their palm, while also asking others to do the same.

Ms Patel said: “Coronavirus has opened Britain’s enormous heart and shown our love and compassion for one another as we come together to help those most in need.

“I am now asking this nation to use that amazing compassion and community spirit to embrace those trapped in the horrific cycle of abuse.

“And to help us all look out for those who need help, we have created a symbol of hope – a handprint with a heart on – so that people can easily show that we will not tolerate abuse as a society, and that we stand in solidarity with victims of domestic abuse.

“I would urge everyone to share it on social media or in the windows of your home, alongside a link to the support available, to demonstrate just how much this country cares.

“And to show victims of domestic abuse: you are not alone.”

The campaign will publicise the support available, including the freephone, 24-hour national domestic abuse helpline number – 0808 2000 247 – run by Refuge, and www.nationaldahelpline.org.uk.

From next week, adverts raising awareness of where people can seek help will run across social media and materials will be made available, including to charities and supermarkets.

Tools such as online support services, including a messaging service with domestic abuse experts, will help those most at risk of abuse seek support and help and guidance during periods when it might be difficult for them to talk on the phone.

Sandra Horley, chief executive of Refuge, said: “What is needed now, more than ever, is to ensure every woman experiencing domestic abuse is aware of the confidential support available.

“We hope the Government’s campaign will reach the tens of thousands of people experiencing domestic abuse, helping send the message – you are not alone.”

The announcement follows Chancellor Rishi Sunak’s £750 million boost to the charity sector, which is set to benefit domestic abuse charities to support the most vulnerable in society.

Domestic abuse charities are being urged to bid when the new scheme is up and running in the coming weeks.