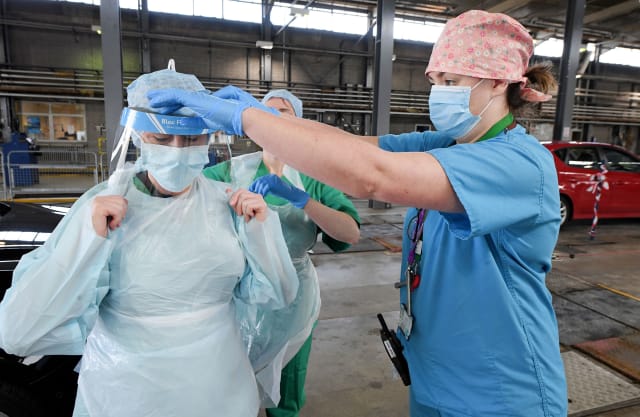 Frontline health staff are “dehydrated” because they are skipping drinks in order not to waste personal protective equipment (PPE), a critical care nurse has said.

The nurse, who asked to remain anonymous, said staff felt they were being “lied to” about masks, and the situation was being handled “horrendously”.

The health worker, from Manchester, hit back at suggestions staff were wasting equipment and said those working on her ward were afraid to take off their masks to drink, as this means they have to be thrown away, raising the risk of dehydration.

She told the PA news agency: “We are being lied to about what masks we do and don’t have, and they’re hiding ones we are running out of.

“I was told we had run out of the masks I am ‘fit-tested’ on, and so said I wasn’t going into the Covid area, and my manager rolled her eyes at me.

“They then brought round one mask for each of us that needed it, and told me to reuse it, even though they’re disposable.”

She said she later went into the Covid-19 zone and within five minutes her visor had steamed up, which she said indicated the mask was not a tight enough fit.

After reporting the issue to her manager, almost in tears, she was eventually given the correct protective equipment out of a locked filing cabinet.

She said: “We can’t eat or drink enough because we can’t have water or snacks in the area and can’t take masks off.

“And we’re too scared to drink too much when we’re out because if we need to go to the toilet then it means taking it all off again and wasting it, so we are all horribly dehydrated.”

She said the general feeling on the ward was that frontline staff were being treated like they are “disposable”.

The Government is facing a backlash after Health Secretary Matt Hancock called PPE a “precious resource” and said it was important that healthcare workers use the “right amount”.

The Royal College of Nursing dismissed any suggestions that healthcare staff were abusing or overusing PPE, and said no equipment is more important than the lives of workers.

The nurse told PA the Health Secretary did not have a clue about the realities of dealing with Covid-19.

“Send him in and see how grim it is and he’ll understand,” she said.

“We aren’t wasting it.

“We’re filling up quickly and the staffing is bad as expected, but the nurses that have been sent to us have absolutely no idea what they’re doing in ICU which is stressful and scary for them and us. The staffing is so unsafe.

“And we probably have the best protection in our department — the wards are like war zones. A friend on a ward said one of her patients died and she didn’t realise for three hours because she was so busy. She was devastated.”