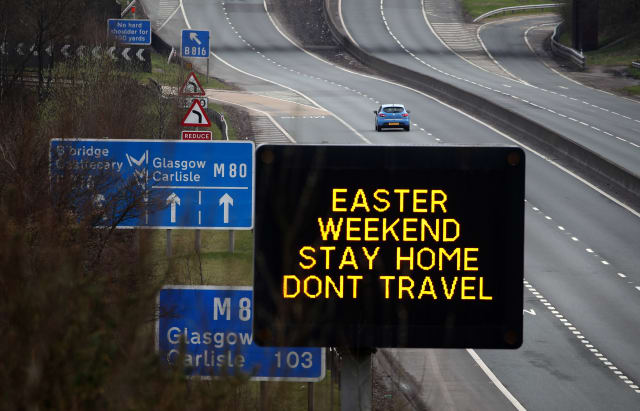 Ministers are appealing to the public to stay at home over Easter after the UK recorded its highest daily death toll from coronavirus since the outbreak began.

With the Government under pressure to set out an exit strategy from the lockdown, officials said it was “premature” to start thinking about easing the restrictions.

The latest figures from the Department of Health and Social Care showed that as of Thursday there were 8,958 hospital deaths from the disease – an increase of 980 on the previous day.

At the daily No 10 press briefing on Friday, Health Secretary Matt Hancock insisted the NHS had the capacity to cope with the rising numbers of cases.

But with continuing fine weather forecast for many parts of the country for the rest of the bank holiday weekend, there were fears people would flock to parks and beaches, potentially undermining the Government’s social distancing strategy.

Mr Hancock acknowledged Easter would be a “test of the nation’s resolve” but said the clear message from NHS staff battling to save desperately sick patients was “they need you to stay at home”.

Meanwhile, Boris Johnson was continuing to recover following his discharge from the intensive care unit at St Thomas’ Hospital where he has been receiving treatment for the coronavirus.

The Prime Minister was said to be able do “short walks” between rests, although Downing Street refused to be drawn on how long he was expected to remain in hospital.

With the Government due to carry out the first three-week review of the lockdown measures next week, ministers are facing calls to explain how the restrictions will ultimately  be lifted.

Foreign Secretary Dominic Raab, who is deputising for Mr Johnson, has said the Government’s scientific advisory group for emergencies (Sage) would be studying the evidence but they would not be able to say more until the end of the week.

Downing Street declined to comment on reports in The Daily Telegraph and the Daily Mail that while ministers hoped restrictions such as the closure of schools and shops could lifted in early June, other social distancing measures might have to remain, potentially indefinitely or until a vaccine is found.

However, speaking at the No 10 press conference, the deputy chief medical officer for England, Professor Jonathan Van-Tam, warned it was “premature” to think the outbreak had reached its peak.

While he said there were signs the “curve is bending” in terms of hospital admissions, he said it was still too soon to start lifting the lockdown.

“We are in a dangerous phase still,” he said. “It’s premature to say we are at a peak and the push we are making with social distancing just has to continue.”

Meanwhile, Mr Hancock caused anger among some NHS staff after he insisted there was enough personal protective equipment to go round provided it was treated as the “precious resource that it is”.

He said the armed forces were part of a “Herculean” logistics effort to get the kit out to hospitals, surgeries and care homes where it was needed on an unprecedented scale.

Amid huge international demand for PPE – including gowns, face masks, gloves and visors – Hancock urged British manufacturers to fill the gap and start producing the equipment needed in the UK.

Dr Chaand Nagpaul, of the BMA council medical union, said PPE should not be considered a “precious resource”.

“For NHS staff facing shortages of protection they need today, they don’t want to hear of a plan, but that this vital equipment is made available to the frontline now,” he said.