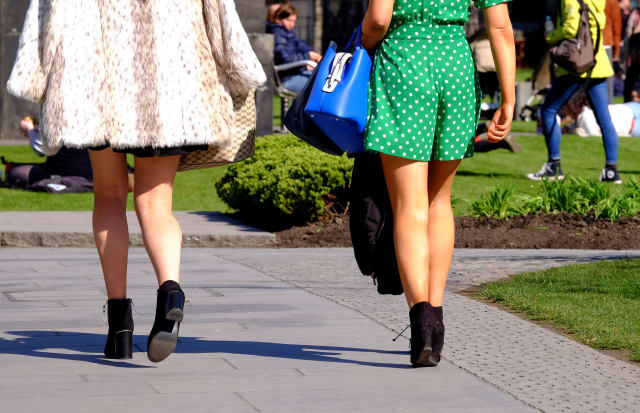 Four men have been jailed in the year since the upskirting law was introduced in England and Wales, figures show.

Campaigners said the legislation offered a route to justice for victims, but said more work was needed to raise awareness about the seriousness of the cruel craze.

Figures from the Crown Prosecution Service (CPS) show 16 men have been convicted of 48 offences since April 12 2019, following a high-profile campaign to create a specific law banning upskirting.

Data shows the vast majority of the offences (33) took place in supermarkets and shops, with nine on public transport, five in the street, and one in a school.

The law was introduced after campaigner Gina Martin lobbied the Government for two years when she was unable to prosecute a man who took a picture up her skirt at a music festival.

Those convicted in England and Wales face up to two years in custody.

Siobhan Blake, CPS national lead for sexual offences prosecutions, said: “It has now been a year since this degrading practice became a specific criminal offence but women continue to be violated as they go about their daily lives.

“This appears to be a particular problem in shops and on public transport, where predatory men are concealing devices to take pictures up women’s skirts.

“This is a serious crime and I am very pleased to see police and prosecutors making regular use of this legislation, with almost 50 convictions secured to date.”

A schoolgirl who had indecent pictures taken of her without consent two years ago said the new law was important, but that many younger people failed to understand the seriousness of it.

The victim, Morgan, now 17, from Birmingham, who asked to use only her first name, told the PA news agency: “I think people think it (upskirting) is a bit of a joke.

“Some people don’t appreciate the seriousness of it. Now there is a law, if people knew they could go to prison for two years, it might put them off.

“I think the law is fine but it’s the awareness that’s needed – people need to be taught from a really young age that this is wrong, if you were to do this, this is the punishment you will get.”

The NSPCC described the law as a “really good step forward” in offering a route to justice for victims and broadening understanding of what sexual abuse is.

But the charity said there remained the need for greater education in schools about what amounts to abuse in an effort to shape behaviour.

Alana Ryan, senior policy and public affairs officer at the NSPCC, said: “We know it’s a lot more complex than just a contact offence – it can occur online, and with multiple people.

“We are beginning to realise how much of an impact technology is having.

“This law change is really important because it puts a spotlight on that kind of technology and it makes it very clear that taking an image and sharing it is not acceptable.

“It’s really important that we have a legal criminal framework for adult offenders but also an understanding that young people need more education to understand what is and isn’t abuse.

Ms Ryan said the roll-out of new relationships and sex education (RSE) at schools from September 2020 will “help create the space for schools to talk about toxic cultures and harassment”.

She added: “There are so many different elements to making sure there is a coherent message across society.

“When you look at #MeToo and Times Up movements, they are also playing a part in making sure behaviours previously considered acceptable are actually recognised as abuse or inappropriate.

“While the legal change is important, it’s not the only thing.”