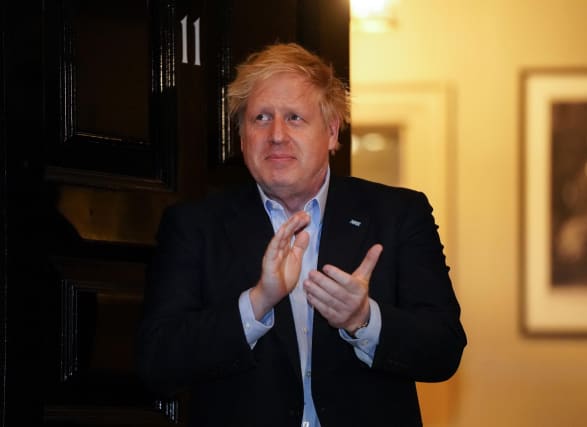 Boris Johnson is likely to feel as if he has been “hit by several buses” and will need time to recover from Covid-19, an expert has suggested.

Becoming ill enough to warrant a stay in intensive care leaves a patient “weak and exhausted” for a “significant” period of time, according to a consultant virologist.

Dr Chris Smith, from the University of Cambridge, who is also presenter of the Naked Scientists podcast, told the PA news agency that, when the Prime Minister is fit enough to be discharged from hospital, it is likely he will do so with instructions to take it easy for several weeks.

The comments came as Mr Johnson’s father, Stanley, said his son “almost took one for the team” and will need a period of rest before he can “pick up the reins” at Number 10.

The Prime Minister has returned to a ward at St Thomas’ Hospital in London after spending three nights in intensive care being treated for symptoms of the coronavirus.

Mr Johnson was again said to be in “very good spirits” after being discharged from the ICU, Downing Street has said.

A spokesman said: “The Prime Minister is back on a ward and continuing his recovery, which is at an early stage. He continues to be in very good spirits.”

Dr Smith told PA that Mr Johnson is likely to be feeling “like he’s been hit by several buses”.

“Being severely unwell and sufficiently ill to warrant ITU admission really takes it out of you and leaves people weak and exhausted for a significant period of time afterwards,” he said.

However, as the PM is younger, was in good health, and had not needed to be put on a ventilator “he is likely to be able to bounce back more quickly”, Dr Smith said.

He added: “It’ll still be a few weeks before he’s feeling like his old self though.”

Doctors and nurses will be aiming to get Mr Johnson home as soon as possible, Dr Smith said.

“To make this decision they’ll monitor respiratory function (and other vital signs) and, if he’s stable and continuing to improve (no evidence of ongoing infection, or other secondary infections) and not oxygen-dependent, including at night, then he’ll go home with instructions to take it easy for – at least – several weeks to recover,” he suggested.

Dr Smith added that it takes at least a week to recover for every day that someone has been in intensive care, and advice to patients includes staying active, eating and drinking well, and building up strength gradually.

In an interview on Friday, Mr Johnson’s father said the whole family is “amazingly grateful” for the efforts of the NHS and for the huge outpouring of support for his son.

He told BBC Radio 4’s Today programme that his son’s illness had underlined the seriousness of the pandemic.

“To use that American expression, he almost took one for the team. We have got to make sure we play the game properly now,” Mr Johnson Senior said.

“This is pretty straightforward now,” he went on.

“He must rest up. As I understand it, he has moved from the ICU into a recovery unit, but I don’t think you can say this is out of the woods now.

“He has to take time. I cannot believe you can walk away from this and get straight back to Downing Street and pick up the reins without a period of readjustment.”

Mr Johnson Snr’s comments are likely to be taken as a further indication that Foreign Secretary Dominic Raab will continue to deputise for the PM in the coming days.

Ministers have been at pains to stress that the business of government will continue while Mr Johnson is treated and recovers from his illness.

Professor Duncan Young, an ICU consultant, said staff will be monitoring the PM’s need for oxygen, and assessing when he is able to go home.

He said: “My guess is he is now on a normal oxygen face mask. That’s the point when it is likely someone is discharged from ICU.

“As his need for additional oxygen goes down, the hospital staff will dial down the level of oxygen, and it will get to the point where he can breathe ordinary air. Staff will have to decide at that point whether it is safe for him to go home.”

As well as being able to breathe without added oxygen, doctors and nurses will be looking to see if Mr Johnson is able to do things for himself, such as walk and eat.

Prof Young said it is “almost impossible to know” how long it will take for Mr Johnson to resume his normal activities.

The PM was admitted to hospital last Sunday evening for tests due to suffering continuing symptoms of Covid-19, having tested positive for the virus 10 days earlier.

He now appears to be on the road to recovery.