Vulnerable people will get priority supermarket delivery slots from next week 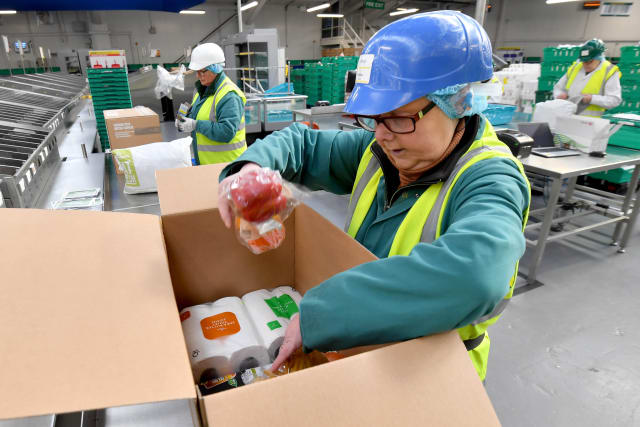 Priority supermarket delivery slots for vulnerable Scots should be in place early next week, Nicola Sturgeon has said, although many are already receiving free food parcels.

During the first ever session of First Minister’s Questions held digitally, Scottish Conservative leader Jackson Carlaw raised concerns that many of the most at risk people have struggled to get food deliveries as supermarkets do not yet have details of who needs priority slots.

The First Minister said about 4,200 packages of food and essential items have been delivered free of charge to “shielded” people unable to leave their home at all during the coronavirus pandemic.

She added that the 136,000 people across the country identified as most vulnerable by medics have all been contacted offering help to get medicine and – if requested – free food deliveries.

Of those, 21,000 have registered for the support service, Ms Sturgeon said.

In addition to the offer of food deliveries through the Scottish Government’s contracts with suppliers Brakes and Bidfood, those in the shielded group will soon be able to ask for their details to be passed on to supermarkets who will offer priority delivery services.

Ms Sturgeon said: “Just under 6,000 food packages have been ordered and we have a national contract with two supermarkets in place for the delivery of those food boxes, free of charge.

“4,200 have already been delivered, so that process is under way.

“We’re also working with supermarkets, for people who want to get their deliveries via supermarkets of their own choice.

“A text will go to people who’ve registered from the service, I hope later today, asking them if they want their details passed to the supermarket, that will then be a priority service delivered by the supermarket, which we expect to be up and running in the early part of next week.

“We’ve taken some time to make sure this is a system and a service that is reliable and robust, but I would stress that people do not have to rely on normal supermarkets slots because the national contract that is in place with Brakes and Bidfood will mean that people get these food boxes delivered free of charge if they register for that service and ask for that service to be delivered to them.”

Following FMQs, the Scottish Tories shared the experience of Leanne Tervit and her 72-year-old mother Margaret, who is in the shielded category having survived sepsis, pneumonia and undergoing three organ transplants.

Leanne Tervit said: “The only way I can get a delivery slot is by checking all the big supermarkets several times a day in the hope one opens up.

“I’m a member of a couple of UK transplant support groups and when the letters telling us to shield came out, the people in England could register and are now able to get priority delivery slots online.

“There are people in Scotland with no support, so their only alternative is to risk going out to the shops when that’s specifically against official advice.

“I’m feeling let down right now by the Scottish Government. There should have been something in place before we were told to shield.”