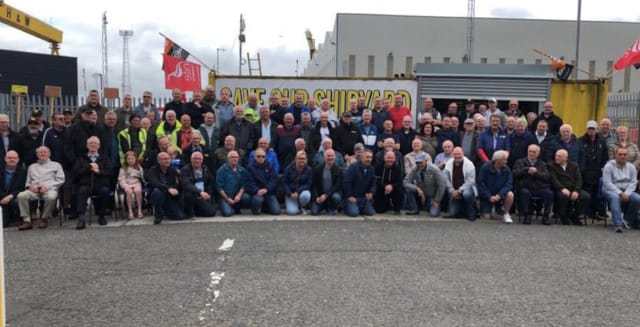 The shipyard which built the Titanic is to sound the loudest alarm in Belfast on Thursday night in appreciation of NHS workers.

The horn at Harland and Wolff has not been heard for two decades.

Applause for those battling coronavirus has filled the streets of Northern Ireland every Thursday night. The freight and passenger ships of Belfast harbour also paid noisy tribute with their fog horns.

Harland and Wolff managing director John Petticrew said: “We figured that it would be appropriate because they are unique times we are in, we thought we would sound a unique alarm.”

It will be heard at 8pm above a cacophony of clapping for essential workers.

Mr Petticrew said: “It is quite simple. It is to support all the essential workers who are working, like nurses and doctors and bus drivers, to show our support from Harland and Wolff, just the same as everybody else.”

He added: “We will just do it a bit bigger.

“It is not about Harland and Wolff, it is about the people risking their lives on our behalf.”

He said the alarm had not been rung for 20-something years.

Stormont’s Parliament Buildings is also expected to once again be illuminated with blue lighting in honour of healthcare workers.

Unite the Union represents workers at Harland and Wolff.

It said: “Harland and Wolff workers will sound the shipyard horn for a minute at 8pm tonight to show their appreciation and that of workers across Northern Ireland for frontline NHS staff and those working to sustain other frontline services in the face of the Covid-19 pandemic.

“The shipyard horn has not been sounded properly in 20 years and is the loudest siren in Belfast; it will be heard in all parts of the city.”

Harland and Wolff was opened in 1861 and survived two world wars.

The yard is best known for building the ocean liner Titanic, which sunk in the North Atlantic on its maiden voyage in April 1912 after striking an iceberg.

The yard built its last ship in 2003 – an MoD ferry named the Anvil Point – and numbers employed have dwindled dramatically from its heyday.

It was bought out of administration last year by London-based energy firm InfraStrata.

The company’s main project is gas storage at Islandmagee in Co Antrim.