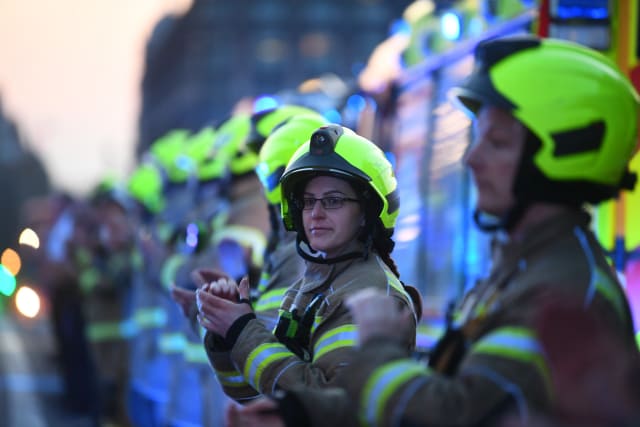 The hospital where the Prime Minister is being treated for Covid-19 was illuminated with blue flashing lights as dozens of police and firefighters joined the weekly round of national applause for NHS workers.

Around 15 vehicles including fire engines, police vans, and even boats spraying jets of water on the Thames gathered for the display outside St Thomas’ Hospital at 8pm on Thursday.

It came less than an hour after news that Boris Johnson had been moved from intensive care back to the ward as he prepared to spend a fourth night at the hospital, which faces Parliament across the water.

The weekly minute of applause across the UK, dubbed #Clapforcarers, is a sign of “solidarity and gratitude” which is helping keep morale high, Scotland Yard Pc Grace Wright told the PA news agency.

She added: “It’s been a tough few weeks and everyone’s doing their best.”

One firefighter, who gave her name as Mo, from Lambeth, told PA the display was an act of “solidarity with our fellow workers”, adding: “We’re all one family.”

She added: “There’s a lot of bad stuff going on in the world, so it’s nice to do something all together, everyone up and down the country.”

Metropolitan Police Pc Robert Tee told PA he was thankful as it highlighted “all the amazing work everyone is doing at this time”.

Politicians and celebrities sent social media posts in appreciation of the weekly act, which also sees people bang pots and pans and ring bells in tribute to key workers tackling the pandemic.

Match Of The Day presenter Gary Lineker tweeted three clapping emojis, adding: “Really lovely that our @NHSuk workers are being shown the love and respect they deserve. Shouldn’t have taken something as dreadful as this, but let’s ensure that it’s continued long after this nightmare is over.”

Scotland’s First Minister Nicola Sturgeon tweeted a picture of herself clapping, adding: “Made it home in time tonight to join my neighbours in the #ClapForOurCarers #ClapForTheNHS #StayHomeSaveLives”