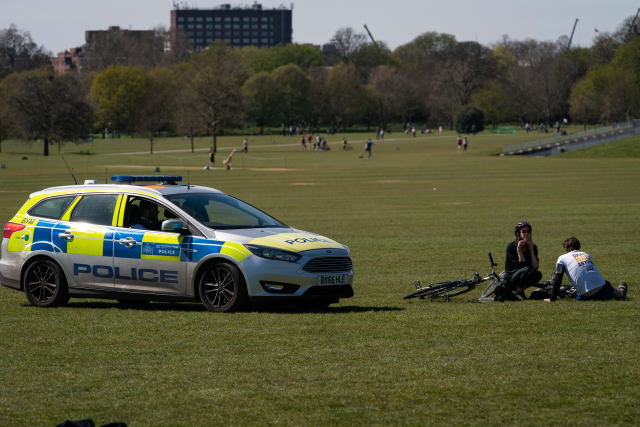 Prime Minister Boris Johnson appears to be on the road to recovery after leaving intensive care – while ministers have urged people not to “ruin” the UK’s progress on coronavirus by flouting lockdown laws this Easter weekend.

He was said to be in “extremely good spirits” and is continuing to be closely monitored during the “early phase” of his recovery from Covid-19.

It came as the Government launched a publicity drive to urge people to stay at home during the bank holiday weekend, when the weather is expected to remain warm and sunny.

Foreign Secretary Dominic Raab, who has been deputising for the PM, earlier warned that it was still too soon for ministers to begin lifting the strict social distancing rules introduced last month.

“After all the sacrifices so many people have made, let’s not ruin it now,” he said at the daily Downing Street press conference.

“We mustn’t give the coronavirus a second chance to kill more people and hurt our country.”

Meanwhile, police warned they were ready to take action against those who flout the coronavirus lockdown rules.

Downing Street offered the Government’s “full backing” to police forces seeking to enforce the restrictions over the holiday period.

But there was a rebuke for Northamptonshire Chief Constable Nick Adderley after he suggested his force could mount road blocks and search shopping trolleys to check if people were going out to buy non-essential items.

Home Secretary Priti Patel told talkRADIO: “That is not appropriate, let me be clear on that. That is not the guidance.”

The warning came as the latest official figures showed the number of hospital patients in the UK who had died after testing positive for Covid-19 had risen to 7,978 as of 5pm on Wednesday – an increase of 881 on the previous day.

Mr Raab acknowledged that it was hard for people hoping to go out and be with their families over Easter, but he urged them to show restraint amid signs the measures were having an impact.

“Unfortunately right now we just can’t do those sorts of things and I am really sorry about that,” he said.

“It’s been almost three weeks and we’re starting to see the impact of the sacrifices we’ve all made.

“But the deaths are still rising and we haven’t yet reached the peak of the virus. So it’s still too early to lift the measures that we put in place.

“We must stick to the plan and we must continue to be guided by the science.”

Mr Raab was speaking after chairing a meeting of the Government’s Cobra civil contingencies committee to consider how it would proceed with the three-week review, due next week, of the lockdown rules.

He said the Government’s Scientific Advisory Group for Emergencies (Sage) would be looking at the evidence but it would not be possible to say any more until the end of next week.

Sir Patrick Vallance, the Government’s chief scientific adviser, said measures were “breaking transmission” of the disease with signs of a “flattening off” in the numbers of new cases and hospital admissions.

However, he warned the numbers of deaths would continue to rise for a “few weeks” and that it was too soon to relax social distancing.

“It is incredibly important that we continue to do what we are doing,” he said.

The chief medical officer, Professor Chris Whitty, said that while the numbers admitted to intensive care had been doubling every three days, that had now slowed.

“This is really now becoming not quite flat, but the doubling time is now six or more days in almost everywhere in the country and extending in time,” he said.

Also on Thursday, the hospital where the Prime Minister is being treated for Covid-19 was illuminated with blue flashing lights as people across the country joined the weekly round of national applause for NHS workers.

Mr Johnson’s partner Carrie Symonds also showed her appreciation for the health service by tweeting a string of clapping emojis.