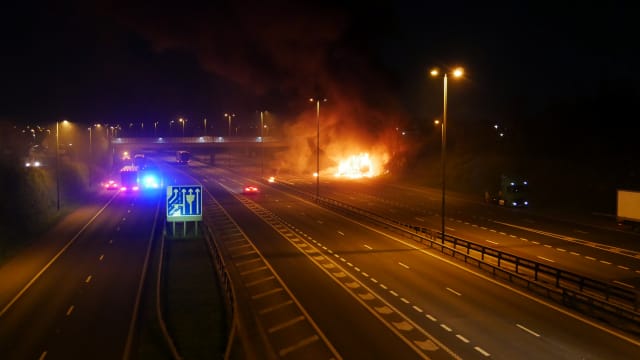 A motorway carriageway has been closed after a reports of explosions coming from a burning lorry.

Firefighters called to the M62 near Leeds found a trailer unit well alight and determined that the dramatic sounds of explosions had come from the vehicle’s tyre bursting due to the heat from the blaze.

Police closed the eastbound carriageway between junction 28 at Tingley and junction 29 at Lofthouse, and warned commuters to avoid the area.

West Yorkshire Fire and Rescue Service said: “Crews are currently in attendance dealing with a fire involving the trailer of a Heavy Goods Vehicle.

“Numerous calls were received stating explosions coming from the vehicle, but on arrival this has proved to be the tyres of the vehicle that were exploding due to heat.

“The trailer unit is well alight and crews are currently using three hose reel jets and two breathing apparatus and are setting up a water shuttle to ferry water to the incident.”

The service said five crews – from Ossett, Hunslet, Normanton and Leeds – were called to the scene and that the incident occurred at about 4.15am.

West Yorkshire Police said: “The M62 is closed Eastbound between Junction 28 Tingley and Jct 29 Lofthouse this morning after a Lorry fire in the early hours. It is likely to be closed through rush hour. Please avoid the area.”

'This is a joke': White House slammed for 'repugnant' video of Trump outing