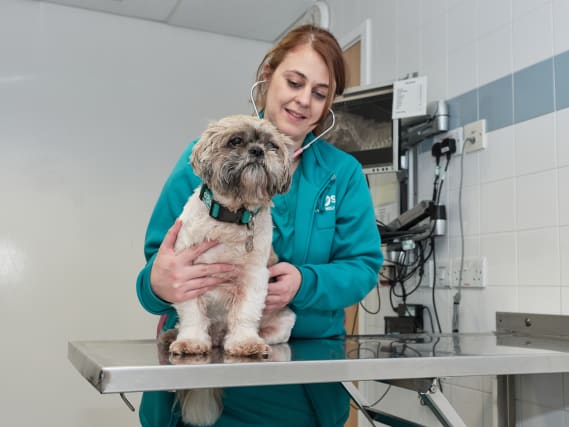 Pet owners are being urged to watch what their dogs eat this Easter after a Shih Tzu needed life-saving surgery when it stole a lamb bone from its owner’s dinner.

Twelve-year-old Toby had to have the bone removed from his throat after finishing off some lamb chops while no one was looking.

X-rays revealed the bone lodged in the top of Toby’s windpipe.

PDSA vet Liz Double explained: “The bone had two spikes at either end and had got very firmly stuck near the back of his throat.

“We were amazed that Toby hadn’t been in more distress, but he was very lucky it hadn’t completely blocked his airway.

“Shih Tzus often have very narrow airways because of the flat shape of their faces, which can increase the risk of anaesthetic and would also make removing the blockage more challenging.”

Mrs Evans said: “We’d eaten lamb chops a couple of nights before, so I did wonder whether he’d managed to grab one.

“When they phoned to tell me what the problem was and that he’d need risky surgery to remove it, I was terrified that I’d lose him.”

The bone was removed while Toby was under anaesthetic and, after two days under observation and some time in an oxygen tent, he was able to return home.

Mrs Evans said: “I can’t thank PDSA enough for saving my little Toby, I don’t know what I would’ve done without them.

“Toby was back to his normal lively self a few days later and I’m very careful to keep any leftovers safely out of his reach now!”

Ms Double added: “Toby is very lucky to be alive. Sadly we often see cases of bones lodged in dogs’ throats, stomachs and intestines, and not all of them have a happy ending like Toby’s.”

The PDSA also warned dog owners to avoid giving their pets chocolate and raisins, both of which are toxic to dogs, this Easter.